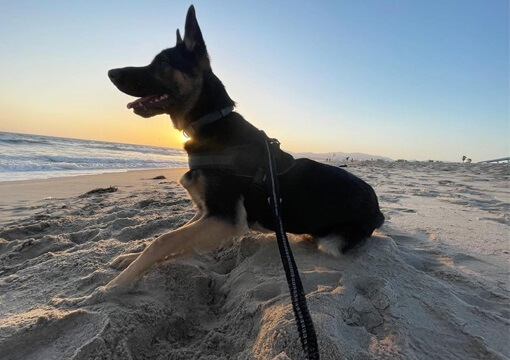 The Malinois X is a relatively new hybrid cross of the Belgian Malinois and the German Shepherd Dog, combines the dog breed characteristics of the parent breeds, resulting in a dog who is an intelligent, good-natured, level-headed, active protector of its loving human family.

Given their protective nature, it’s no surprise that Malinois X are considered loyal dogs. They develop a solid relationship with their owner. While you may think of loyalty as a protective factor, it may also be significant when it comes to a Belgian Malinois German Shepherd mix following commands.

Number 09: They are devoted and protective.

German Malinois are athletic, loyal, and protective by nature, and combine similar characteristics with Belgian Malinois and German Shepherds. Because Belgian Malinois have a natural desire to protect their family members, this mix makes an excellent family companion.

The Belgian Malinois German Shepherd breed, on the other hand, requires socializing and training from an early age.

This strong, fun-loving, loyal, and hardworking dog will fit into your lifestyle as long as you maintain firm control. While the hybrid looks to inherit the German Shepherd Dog’s calm attitude, your hybrid will also be energetic, loyal, protective, and demanding when it comes to being the focus of a busy home, unable to let you ignore her.

The Malinois X is the result of a mix between two extremely energetic dogs. Yes, Belgian Malinois like physical activity, but it goes deeper than that. Allowing a Malinois to run around in your backyard or garden isn’t enough. According to the American Malinois Club, these dogs excel at obedience, tracking, agility, flyball, herding, displaying, Schutzhund and other protective sports, search and rescue, police work, and pretty much anything else a dog can do.

Number 07: Malinois X have an endless source of energy.

If you are a really active person, the energy levels of a Malinois X may be regarded positively. Their energy, on either side, has no limits. If you have a busy work schedule or an active social life, the Shepenois may not be the ideal dog for you. If you work long hours, travel frequently, or have other activities that keep you away from your dog, you should reconsider getting a Malinois X.

The Belgian Malinois German Shepherd breed, like other mixed breeds, does not guarantee which features each parent will inherit. Their coat colour represents the two species, with black, brown, Fawn, blue, and white shades.

The brown, almond-shaped eyes with ears are high and upright, reflecting both parents’ alert look.

The Belgian Malinois German Shepherd hybrid can take on the physical and appearance characteristics of either or both breed parents. The strong, athletic body is slightly more compact than the German Shepherd side of the bio mix and is covered with a coarse, harsh, and rough coat that is double layer, short to long, and not hypoallergenic.

Owners of Malinois X dogs must brush their dogs at least twice a week. This will help in the upkeep of their coat’s health and quality. During the changing seasons, most members of the cross breed blow their coats twice a year. You must look after their ears, eyes, nails, and teeth.

Number 03: They are a high-energy breed of dog.

Because German Malinois are high-energy dogs, owners must ensure that their pet gets enough exercise to avoid destructive or undesirable behaviour caused by depression. Vogue Belgian Malinois, a dog walking service, recommends up to 120 minutes per day for German Shepherd Mix. That works up to 10 kilometres each week.

German Malinois pups can range in price from $500 to $2000. Some can be more expensive since the price is determined by several aspects such as the availability of the pup, the gender, the location and popularity of the breeder, and the parents’ lineage.

A single German Malinois puppy can cost well over $1,000. Depending on where you live and the breeder you choose, the price might be considerably higher. This pricing does not include any costs associated with adopting a German Malinois puppy, such as insurance or pet visits.

Number 01: They are stubborn

Given the genes they will acquire from both parents, Malinois X puppies are likely to be intelligent. German Shepherds and Belgian Malinois are well-known for their intelligence, learning abilities, and loyalty. However, like with any clever dog, this can lead to stubbornness at times. Malinois X have been known to push their owner’s boundaries.

You may also check

German Malinois are extremely energetic, clever, and hardworking breeds of dog. This breed is ideal for those who are busy and want a working dog to accompany them. A German Malinois, on the other hand, is not suited for families with small children or other pets.