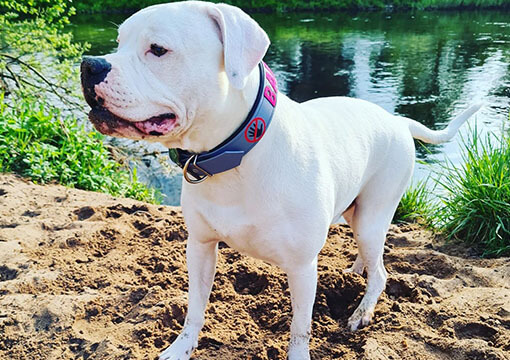 The American Bulldog is a well-balanced, athletic dog with exceptional strength, endurance, agility, and a friendly demeanor. Historically, they were bred to be farm workers’ dogs.

The American Bulldog is a walking paradox: powerful friendly, serious amusing. With one eye on strangers, this big-hearted breed is glad to play with you and your children.

American Bulldogs are best suited to households with active pet parents. If they’ve been trained and socialized from a young age, they get along well with other dogs and children.

They are bright and affectionate, they make excellent family pets. They require a lot of activity and a pet parent who is well-trained and energetic. The bulldogs will mature into loving family companions with patience and care.

The American Bulldog is a large, powerful dog whose initial purpose was as an agricultural utility dog, and a family companion and protector. The American Bulldog is estimated to have arrived in the United States as early as the 1700s, with many owners and families arriving during the 17th and 18th centuries.

The origins of American bulldogs can be traced back to the English countryside when they were frequently seen in butcher shops. Laborers carried their robust working dogs with them when they immigrated to the American colonies in the 17th century.

During WWI and WWII, the breed was nearly extinct, with the only survivors being kept on farms predominantly in the southeast. They were useful for both herding and hunting because of their intelligence, devotion, and agility.

The proud stance of the American Bulldog serves to show off their loyal disposition, which appeals to both families and solitary pet parents. A strong chest and a confident walk indicate that you’re ready to move and play. The American Bulldog has a loving soft side thanks to those sweet flop-over ears and a smooth white coat with different black and brown markings.

American bulldogs are affectionate and loyal dogs who like spending time with their owners. You may expect bulldog to be engaged, enthusiastic, communicative, and interested in your everyday activities. Even if they are rescues who were part of a different family, most bulldogs exhibit strongly bonded tendencies.

American Bulldogs are often confident, gregarious, exuberant, and vivacious dogs who like spending time with their owners. They form close bonds with their owners and are happiest when their masters give them time and care.

They are less sociable with strangers; their predecessors were farm dogs who guarded the home, animals, and children when their owner was gone.

They grow later than many other breeds, not until the age of two, and as pups, they are interested but distant with strangers, but confident when they reach adulthood.

Size and appearance of American Bulldog

How big is a Contis?

The ears of an American Bulldog are medium in size, situated high on the head, and can be cropped, but they are preferred unwrapped. Ears that aren’t clipped may droop forward, spike up, or fold backward.

The dark brown eyes of an American Bulldog can be round or almond-shaped. The muzzle of this puppy is large, with a little taper to a black or liver-colored nose.

The American Bulldog’s coat is white, with black, brown, red, tan, or brindle markings on occasion. They come in a variety of colors, including solid black, blue, grey, merle, and tri-color.

Genetic health issues in the American Bulldog are a possibility. Breeders should conduct genetic disease screenings on all possible mating pairings. Allergies are common in some American Bulldogs. Skull deformity brachycephaly was increased through breeding selection due to the ideal of beauty regarding the shape of the face.

The American Bulldog was developed as a muscular and athletic all-around working dog for catching pigs and cattle. They are calm and loving family pets, but they may have issues with other dogs, particularly those of the same gender.

They have a high energy level and require early training and socializing. With an average lifespan of 10-13 years, American Bulldogs are generally healthy.

The longevity of an American Bulldog might be reduced by one to three years. They are prone to health problems, and their longevity varies dramatically depending on whether or not they have access to veterinary care.

How to take care of American Bulldog

American Bulldogs require a lot of physical activity. They aren’t particularly boisterous when they’re indoors, but they can become bored quickly. Play with them frequently or take them on long walks to keep them from being bored.

American Bulldogs have a shorter nose than most other breeds, exercise them outside in hot weather with caution. American Bulldogs are more prone to overheating and difficulty breathing than other breeds. So keep an eye on this or bring a portable water bottle for your dog with you.

The American bulldog is a high-energy breed that requires enough exercise to stay calm. Bulldogs suffer because obtaining enough exercise becomes difficult as the dog ages. Most bulldog owners find that taking their dog for a leisurely 40-minute walk one to two times a day is the best solution.

It is an important and valuable way to taking care of your American Bulldog. Like all dog breeds, This breed needs to go to the vet once per year for a checkup.

Vaccinating your pet has long been regarded as one of the most straightforward approaches to assist him to live a long, healthy life. Puppies are vaccinated at 8 and 10 weeks; your young American Bulldog should then be given a booster 12 months after their first vaccination because it’s beneficial to take care of any pets.

American Bulldogs have short coats and shedding that is mild and seasonal. Because of this, you should brush your American Bulldog’s coat on a regular basis. This will maintain their coats healthy and reduce the amount of hair in the house. During their shedding seasons, expect to vacuum frequently.

American bulldogs have short coats; they don’t require nearly as much grooming as other dogs. Wash bulldogs once a month at the very least, and remember to cut their nails and clean their ears. Bulldogs are prone to skin infections and other eye disorders, so pay close attention to the region surrounding their eyes.

Each dog is individual and, therefore, will need a particular diet.  Since the American Bulldog is inclined to hip and elbow dysplasia, provide him food enriched with fish oil, glucosamine, and chondroitin.  It is necessary to evade over feeding your dog as it can only exasperate health obstacles such as elbow and hip dysplasia. Your most essential purpose should be to provide your pet companion properly.

The American Bulldog is a big dog, so going for the best big breed dry dog food may be the correct choice. If, upon all benefits, your dog turned out small, search for one of the greatest dry dog food for small dogs and see if they like it!

Here we list out some of the best dog food for American Bulldog.

Remember that some of the smallest breeds have the most refined taste. Even though your American Bulldog is big, we’re sure your puppy won’t mind taking a bite of these best dry dog food brands for Pugs!

How to train American Bulldog

American bulldogs are devoted but stubborn companions who may require additional training and patience. Begin training bulldogs as soon as possible, and continue to do so throughout their adult life. Try a few short training sessions throughout the day, and keep an eye on how tired your dog is.

Potty training your American Bulldog puppy can take a lot of time, patience, and attention, but luckily, one tool can make a huge difference: a potty training pad.

If you’re planning on crate training, your American Bulldog puppy should be placed to bed every night in its crate. However, you may require thinking of the best place for that crate at the beginning.

American Bulldog puppy might produce aggressive behaviors and severe anxiety if you do not enforce the early socialization. In the method of early socialization, you will present the puppy to different objects, people, and areas as advanced as possible.

There are two stages of this process. The first one initiates as early as 2 and 1/2 weeks. From this period of time up to four weeks of age, the buyers will hold the dog in a listed amount of time. The second stage of socialization begins from four weeks of age to 16 weeks of age. You will let the dog become familiar with neighboring formations and smells.

How much do American Bulldog cost?

Bulldogs are one of the most costly dog breeds available. Puppies of the American Bulldog cost between $1,200 and $1,500. This dog is clearly on the expensive side of things, so if you don’t have a lot of money upfront, you really shouldn’t get it.

American Bulldogs are larger and more agile than their English bulldog counterparts, and they have grown in popularity as companion dogs and family pets in the United States throughout time.

They have won the hearts and homes of many people in the UK and other countries across the world thanks to their good appearance and kind demeanor.

The Kennel Club has not recognized American Bulldogs as a distinct breed, but they are recognized by the United Kennel Club and the American Breed Club, and both organizations have established a standard for these loyal and fearless dogs.

American bulldogs are a popular breed in many parts of the country, finding one should not be difficult for potential adopters. Look for American bulldogs in need of forever homes in your area at local shelters, or contact breed-specific rescues to meet a variety of canines.

If you’re set on starting with a puppy, do homework first and find a reputable breeder. Always request a health guarantee as well as the medical history of the litter’s parents. You should be able to meet the litter’s parents and witness the conditions in which their canines are maintained if you choose the correct breeder.

Advantage and disadvantages of American Bulldog