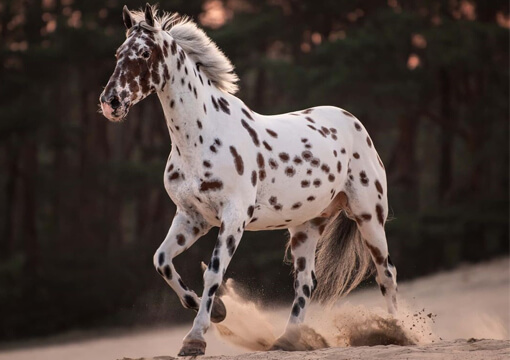 The Appaloosa horse is an American horse that is defined by its colorful spotted coat pattern. Appaloosas are considered to be kind, pleasant, and loyal friends. They are highly eager to please, making them an excellent horse breed for equestrians of all levels of expertise.

The origins of the Appaloosa horse in America may be traced back to the 1500s Spanish invasion, who introduced “raindrop” horses to Mexico and North America.

The Nez Perce Horse is another name for the Appaloosa. The first documented records of horses in Oregon come from Meriwether Lewis and William Clark’s notebooks, when they saw spotted horses similar to the Appaloosa among the Nez Perce Tribe.

When the United States government attempted to take over Native American land in the late 1870s, the breed was on the verge of extinction. While some tribal members left with their horses, many of the early Appaloosas were stolen, lost, or slain.

During the 1930s, there has been growing interest in the breed, and the few surviving horses created a fresh basis for the breed. The Appaloosa Horse Club was founded in 1938 as a breed registry to oversee the breed’s rebirth. It has now grown to become one of the world’s largest horse breed registries.

The spotted coat of the Appaloosa is its most unique characteristic. While there are many other spotted patterns and color for the Appaloosa, the marble, snowflake, and leopard are some of the most popular. Other interesting characteristics include its compact, striped hooves, and large eyes with surrounding white sclera.

The horse’s head is small but finely formed, and its ears are constantly attentive and looking up. It has a muscular physique with a short, straight back, a long neck, and a deep chest.

The Appaloosa is self-sufficient, smart, and fearless. It may also be fierce, making it an excellent battle horse in the past. It is currently considered as one of the greatest riding horses, especially to people who know how to handle horses.

Appaloosa horses normally stand between 56 and 60 inches tall, however some can be slightly bigger. It weighs between 950 to 1,200 pounds on average.

An Appaloosa’s coat colour is a mix of a base colour and an overlaid spotting pattern. The Appaloosa Horse Club recognises the following basic colours: bay, black, chestnut, palomino, buckskin, cremello or perlino, roan, grey, dun, and grulla.

Bald, blaze, snip, stripe, and star are some of the facial color and patterns. Eel, pastern, ankle, half-pastern, coronet, stocking, half-stocking, and lightning markings may be seen on the legs.

The ApHC also recognises the idea of a “solid” horse, defined as one with a base colour but “no contrasting colour in the form of an Appaloosa coat pattern.” Solid horses with mottled skin and one other leopard complex trait can be registered.

Appaloosas require a standard horse diet that includes fresh grass, high-quality hay, grains, and some fruits and vegetables. They may require vitamin and mineral supplements, especially if they will be unable to graze freely in pasture.

Appaloosas eat the same feed and hay as other horses, but in less quantities. They are normally very easy keepers and may survive on a diet of grass and hay with no supplementary feed unless they are working hard or pregnant/lactating.

The amount of food they require is mostly determined by their size and amount of activity.

Parasites are a common health issue for Appaloosas, but proper grooming, sanitation, de-worming, and other precautionary care should take care of this issue.

These horses are significantly more tolerant of cold than of heat. On hot days, they require plenty of water and minerals to stay hydrated. It is critical to provide them with shade.

Grooming once or twice a week is recommended to eliminate dirt, debris, and kinks. Brushing your horse’s coat more frequently might help it look its best if it is mostly white. Using a horse wash on a regular basis might also assist.

Uses of an Appaloosa Horse

Appaloosa horses range in price from $1,000 to $10,000. It is determined by the horse’s quality as well as the quantity of training it has received. Appaloosa numbers are growing, therefore finding a suitable horse isn’t difficult.

Is the Appaloosa Horse the Right Horse for You?

This docile breed is ideal for starting equestrians and anybody looking for a faithful equine companion. Many children can ride an Appaloosa with ease. It’s a low-maintenance, adaptable breed that’s suitable for both general riding and participating in equestrian sports.