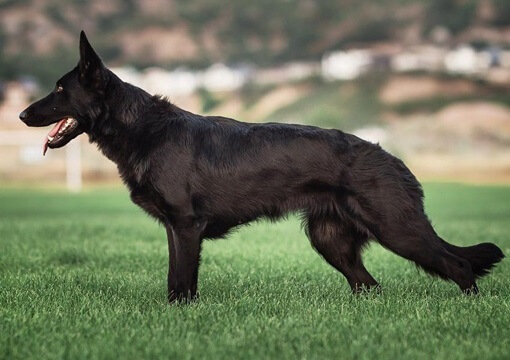 The origins of this breed can be traced back to Germany, hence the name. They are derived from a line of herding dogs such as Berger Picard, with the purpose of improving their abilities and skills.

The black German Shepherd was a result of an accident. It’s unknown when the first black Shepherd was developed, but the gene was thought to be recessive until solid black shepherds made it dominant. If both parents are black, the gene becomes dominant.

Although German Shepherds have the black gene, it is uncommon for their offspring to remain black after eight months. A pure black Shepherd will be born black and remain black throughout its life.
If you have a litter of brown or white puppies, there is a 0% chance that they will turn black.
The German Shepherd arrived in the U.S. in the 19th century. The breed was gaining popularity, but it was cut short by the First World War. After the word “German” became incorrect, they were renamed American Alsatian or Shepherd dog.

The loyal, calm, and fearless personalities of Black Shepherds are well-known. They are excellent guard dogs, but they require attention and time for their owner or family. The Black German Shepherd is an excellent training dog since it is clever, alert, and eager to learn new things.

They are a powerful and strong breed – not particularly suitable for first time owners or those who don’t know their requirements. If trained and socialized from a young age, by someone who understands working breeds, you will have a great family dog!

Temperament of a black German shepherd

Black German Shepherd is it makes them look more striking. They have the same disposition as any other German Shepherd, making them an excellent working and household dog.

These dogs are quite lively and active, and they like being outside and getting some exercise. They also require a lot of mental stimulation because they are highly bright and dislike being left alone.

Strangers may be put off by a Black GSD’s intimidating look, but as a dog owner, you should be aware of the breed’s disposition.
They are loyal and vigilant canines who are eager to show their confidence by keeping an eye on their family.

The coat of a black German Shepherd should be longer on the body and shorter on the legs and head. Because they have a double coat, they shed a lot, especially around shedding season. They should have a clear cut head with a black nose and almond eyes, erect ears, and a bushy tail, according to the breed standard. The Black German Shepherd has a complete black coat that can be medium or long in size.

All of these physical attributes are shared by black German Shepherds.

Unfortunately, German Shepherds are recognized for having a high risk of suffering a number of medical issues. Black German Shepherds have a life expectancy of 12 to 15 years; a health condition is common among the breed, but not life-threatening. Hip and elbow dysplasia is a frequent health issue in dog.

This disease develops when the ball and socket joint is faulty, and it can lead to arthritis or even lameness. Maintaining a healthy weight in your dog will assist with this. Other potential health issues are as follows:

Before adopting a dog into your home it is necessary to know how to take care of it. You must meet its physical and emotional requirements. This includes providing healthy food, safe drinking water, protection, and the ability to live in a safe environment.

Caring for a dog is a large responsibility, and dog ownership is not something to be taken lightly; nonetheless, this work will assist you in successfully developing a relationship of love and trust with an essential new part of your family.

Black German Shepherds are highly energetic dogs. They will need at least an hour of activity per day, preferably spread out across two trips. Luckily, they are up for everything, so it won’t be difficult to find things to do with them.

Here are some common aspects that can help you maintain your black German taking care.

A black German shepherd should have at least 2 hours of activity per day. This could be walks and some off exercise in a safe environment, as well as additional playtime and coaching from on high to provide them with a diverse range of activities.

The black German Shepherd is incredibly intelligent, which can make them easy to train unless they’re not trained young enough. Routine, positive reinforcement, and reward are all things they thrive on. After each trick, tell them they’re good boys/girls. Introduce them to a variety of things, including young people, noisy machines, hats, other animals, and farm equipment if they’re farm workers.

These dogs liked traveling on walks and hikes with their owners, as well as swimming, so make sure you have the time to spend with them outside before purchasing this breed.

Black GSD have a double coat, which means they shed a lot. Two times a year, they will shed more, and the rest of the year, you can expect less shedding. This can always be helped by brushing them correctly. You can also take your dog to a grooming salon to get his or her black coat tamed.

Grooming should include bathing, nail cutting, ear cleaning, and teeth cleaning. Keep your dog clean and groomed; if not washed frequently, its fur will attract dust and mud and may mat. If you’re going on vacation, hire a house sitter or put them in a kennel because they’ll need a lot of attention.

The Black Shepherd is a big dog, his diet should be big too. It is therefore advisable that you give them a diet specifically designed for large dog breeds, and that you should always check the back of the dog’s food package to see how much food they should take based on their weight.

Black Shepherd puppies are usually fed four times a day by their owners. Because older dogs are more prone to edema, it is important to feed them slowly as they get older, or blush can be fatal.

The Black German Shepherd should consume 20 calories per pound of body weight, which is about 1500 calories. Therefore, puppies should be fed about 3 cups of food three to four times a day.

How To Train Black German Shepherd ?

Fortunately for you, the Black Shepherds are easy to train because they are smart and eager to please their master.

During their puppy stage, these dogs must also begin socialization. The Black Shepherd must learn how to connect with family and friends, as well as how to tell the difference between a friendly mailman and a dangerous stranger.

Crate training, which Adams recommends, is also a great idea at this time. Black GSD trainer and dog sports enthusiast Alexa Hagood, LVMT, agrees: “Crate breaks, even while brief, can assist the puppy become used to going in the crate and having some alone time.” She suggests starting with utilizing the crate during feeding times and times when the owner needs to do daily tasks to reduce the risk of a puppy developing separation anxiety.

Here’s a useful table that shows the Black German shepherd age and the maximum duration recommended:

The importance of proper socialization for this breed cannot be overstated; as Adams points out, “confidence is the foundation for most training.” From a young age, it is vital that the Black German shepherd puppy is properly socialized. It is important for the puppy’s development to be exposed to new sights, sounds, and smells in a safe manner. Confidence comes from good socialization.”

Obedience Training for a Black GSD

Black German Shepherd Dog’s work ethic is famous, and with early and continued training, you can encourage your dog’s best working attributes.

GSDs are known for their obedience, so start teaching your puppy basic commands like sit, down, and stay, as well as loose-leash walking, when he or she is young.

Enrolling in a puppy obedience class can be highly beneficial for both teaching and socialising these commands, and it’s never too early to start thinking about CGC training.

What is the cost of a black German shepherd?

Is a black German Shepherd rare?

What color is a purebred German shepherd?

Black and tan, black and red, black and cream, and black and silver german shepherd are the most popular German Shepherd colours. German Shepherds will have one of two coat types: medium or long. They both have double coats, with a more dense guard layer and a softer undercoat.

What is the most uncommon German shepherd colour?

The blue German Shepherd is one of the rarest variations of the breed and may cost up to five times as much as traditional black and tan variations. Because this colour is considered a serious flaw, these dogs are not permitted to compete in shows, despite the fact that they are recognized by the American Kennel Club.