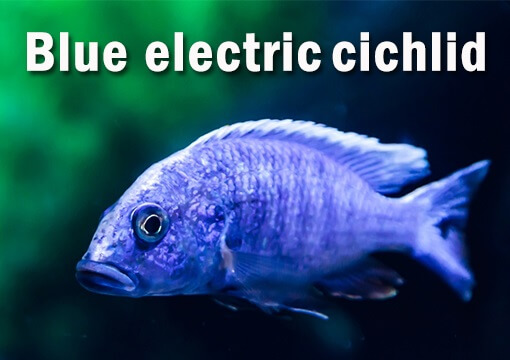 Electric blue hap is a type of fish that is semi-aggressive. They require a large amount of space to create territories and are more aggressive against fish of the same color.

The electric blue hap is a cichlid fish that is only found in Lake Malawi. It loves caves and nooks in rocky substrates to call home.

They, like all other cichlids from Lake Malawi, thrive in hard, alkaline water. The electric blue hap is found in Lake Malawi, Africa, at both shallow and medium depths. Lake Malawi is the world’s fourth biggest freshwater lake by volume and is famous for its cichlid variety.

This fish’s scientific name honours German zoologist Ernst Ahl (1898-1945), who first identified it as Haplochromis serranoides in 1926, although this name had already been used by Charles Tate Regan in 1922, despite the fact that Regan’s name is a synonym for Haplochromis spekii.

Blue electric cichlid fish are rarely precisely identified in the aquarium hobby, and their specific behavior can be difficult to predict. They usually swim in the bottom and middle of the water column.

Despite the presence of larger fish, this cichlid will seek to rule the tank. The blue electric cichlid is a ferocious predator. Other aggressive cichlids of comparable size, as well as those from Lake Malawi, should be kept in the same aquarium as the Electric Blue Hap.

The Hap cichlids differ from the Mbuna or rock-dwelling cichlids in that they live in open water and are found where rocks meet sand.

They’re aggressive diggers, so you’ll often notice them delving around the substrate looking for small things to eat. If you have any rooted plants, this could be a problem because these small fish have a tendency to uproot them.

How big do Blue electric cichlid get?

The typical length of an blue electric cichlid is between 6 and 7 inches. This is a relatively reasonable size that allows them to feel at ease in a typical tank.

The Blue electric cichlid requires a tank size of 30 gallons. This will provide them with enough space to swim and exercise. People have been known to place them in somewhat smaller tanks, but we highly advise against it.

These fish will like having plenty of cracks and crevices to establish territories in the form of rocks or terra cotta plant pots. Just make sure that both have been cured for aquarium use, since uncured decorations can cause variations in water parameters.

To protect your cichlids from being upset, keep the water conditions constant. The water temperature should be steady between 75-82° F (23.9-27.8° C), with a pH somewhat more alkaline than normal between 7.6-8.8; crushed coral may be useful in maintaining a higher pH.

Electric Blue Hap has a more livable personality than many Malawian cichlids and is considerably calmer. Rocks or terra cotta plant pots will provide lots of cracks and crevices for these fish to create territories. A minimum tank capacity of 75 gallons is required for this fish.

To protect your cichlids from being stressed, keep the water conditions consistent. The water temperature should be kept constant between 75 and 82 degrees F (23.9 and 27.8 degrees C), and the pH should be somewhat more alkaline than usual, between 7.6 and 8.8, with crushed coral used to assist maintain a higher pH.

The Blue electric cichlid’s natural food consists largely of fry from other Malawian cichlids. Fish are great at transitioning to high-quality dry food with a high protein content that is particularly developed for cichlids at home.

It is essential to give a variety, high-quality feed for these aquarium fish in order to keep their color vibrant. This will contain a variety of raw, frozen, freeze-dried, flake/pellet, and freeze-dried foods.

Blue electric cichlids are known for being aggressive. They like any other cichlid, will defend their territory and pursue other male electric blues and similar-looking species. Some hobbyists have found that their electric blues swim around the edge of the tank rather than staying in one limited region because they have more active fish.

How much do blue electric cichlids cost?