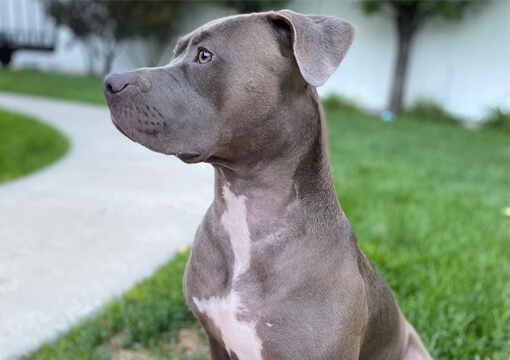 The Blue Nose Pitbull is purebred dog is also known as American pitbull terrier. This is not a different breed but it is a different name due to their blue colors.

There are main three types of pit bulls like American Pitbull Terrier, Staffordshire Bull Terrier, and American Staffordshire Terrier. This Blue nose pitbulls aren’t one type of breed. but they can be any type of pitbull, it just depends on the genes present in a certain dog.

The blue nose pitbull is a one kinds of pitbull except for a slight pigment changes in their nose. The pitbull came into existence during the 19th-century in the United Kingdom when a bulldog and terrier were crossbred.

Their personality will be like others in the pit bull breed. Thay are generally extremely loving, loyal, and even good with children. They are incredibly trainable, take commands well, and this is great because it helps get their high energy out.

This particular breed of dog was not bred to be aggressive or to fight, which is a common misapprehension with many dog breeds, especially the blue nose pitbull.

They are affectionate and loyal to those they know the most, they love to play and make the best family dogs. pitbull quickly form strong bonds and will become attached equally quickly.

Blue nose pitbulls are great with people of all ages they can be a bit wary around other dogs. They need to be socialized from a very early age with other dogs to ease any fears they may have.

How big is a Blue nose pitbull?

They have height from 1.5 to 2 feet and weighs around 30-85 pounds. They have a short and silk coat that comes in a variety of colors, though is mainly bluish grey. Their coat is typically a solid color, and sometimes it can be brindle stripe, which is when it appears to be tiger striped.

Pitbulls can come in a variety of colors, from brown to black. He isn’t really blue, but it’s just a light gray. Their noses, lips, eyes and toenails are blue or gray, and can be identified from a young age compared to traditional black noses.

They have a broad face and a short muzzle. With blues specifically having small blue eyes and a light gray nose. They have a stocky and athletic body, with defined muscles.

The blue nose pitbulls are generally healthy dog breed, but it’s still prone to certain some health problems. They are known for being prone to allergies to grass, which is a very sad allergy for a dog to end up living with. They are also recognized as being prone to heart disease and cataracts.

Blue pitbull are often susceptible to premature hair loss due to their genes.

Heart disease is another thing to watch out for. Because the blue nose pitbull doesn’t have the strongest immune system, it could lead to their heart not working properly.

If you are considering getting a Blue Nose American Pit Bull Terrier, their lifespan can be between 10 and 12 years on average. For an American Staffordshire Terrier, you can expect them living 12-16 years.

How to take care of Blue nose pitbull ?

Taking care is one of the important factors for your blue nose pitbull. Proper take care for the pitbull will involve many phases that will all work in combination to maintain excellent health and promote learning and good behavioral habits.

Here we discuss about some important tips to taking care of your pitbull.

Blue pitbull will require up to 60 minutes of brisk walking two times a day. The physical exercise needs of a pitbulls are usually relatively high when compared to other dog breeds, and this remains true throughout the dog’s life.

Blue Nose Pit Bulls are very athletic. They were bred to hunt. This race is very beneficial for agility sports if they can be given the necessary exercise and mental stimulation.

When you have a blue nose pitbull, or another animal, it’s your responsibility to ensure they get the best care possible. This is why it’s important to schedule regular visits for your four-legged friend at a veterinary clinic.

Generally, a complete physical examination of each dog is required at least once a year. This includes taking your dog’s temperature, checking his heart, lungs, weighing, stomach, eyes, teeth, ears, skin, and coat.

Brushing plays a significant role in the appearance and overall health of your puppy coat. Blue nose pitbull generally require much grooming. In fact, the most time consuming grooming task is cleaning up after the shedding and occasional brushing. Basic grooming is still necessary for these dogs: tooth brushing, bathing, nail clipping, etc.

It is important to brush your blue nose pit bull a few times a week with a brush or mitt to help reduce shade and improve coat health. Brush your pitbull teeth at least two or three times a week to remove tartar buildup and the bacteria that lurk inside it. Daily brushing is even better if you want to prevent gum disease and bad breath.

Blue nose pitbull require special nutrition to help them grow healthy and support those rambunctious puppy energy levels. The best food for Blue nose pitbulls are foods that are full of nutrients, to promote their wellbeing and growth.

When you deciding what is the best dog food for blue nose pitbull is, you’ll need to know how many calories your puppies needs to fuel his growth and energy requirements.

If you’re feeding a growing blue nose pitbull puppy, you can rely on these dog food to give them the appropriate health support and nutrients that they need as they grow into adult dogs.

How to train Blue nose pitbull

It’s an good time when you adopting a new blue nose pitbull puppy in your home, but a new puppy too comes with lots of challenges. The first and biggest challenges that you may face is that of potty training.

If your pitbull decide to go with an indoor potty, so placement is very important. Find a space in your home where messes won’t interfere with your life.

This training a blue nose pitbull can be disappoint, dull and time-consuming, but it’s a necessary step in training your puppy. A pitbull owner may believe something is wrong with the puppy if it has an accident indoors.

Potty training your blue pitbull puppy can take a lot of time, patience and attention but luckily, there is one tool that can make a huge difference a potty training pad.

Some dog experts recommend that you begin house training your puppy when they are between 12 weeks and 16 weeks old. At that time they have ample control of their bladder and bowel movements to learn to hold it.

Crate training is primarily a method of getting a crate for your puppy. For many people training your dog or blue nose pitbull to create is a necessary step if you are planning to leave home and hope to be in the same condition when you return.

Crate training your dog has many benefits. If you’re planning on crate training, your blue nose pitbull puppy should be put to bed every night in its crate. However, you may want to consider the best place for that crate at the beginning.

First, it is important to teach your dog to enter the crate on cue. You can initially shape this behavior by tossing a yummy treat into the crate.

Using a crate is a important way to keep your dog from getting into riot when you can’t supervise them directly.

Crate training is good for hunting dogs, because the keeping them comfortable during hunts and on the road.

It can be very difficult to manage if your pitbull misbehaves. Effective positive dog behavior training can help you prevent their misbehavior. The rule is to reward good behavior and redirect or ignore unwanted behavior.

The very common dog behavior problems is the first step to solving and preventing them. A solid base of obedience training will help you prevent or better control many of these issues.

You can choose best method for you and your dog before you begin dog obedience training. Training styles vary, but most trainers agree that dogs respond best to positive reinforcement, such as praise or treats.

Young Blue nose pit puppies have short attention spans but you can expect them to begin to learn simple obedience commands like “sit,” “down,” and “stay,” as young as 7 to 8 weeks of age.

Socialization means exposing your blue nose puppy to new experiences in order to make it feel very relaxing.  Good socialization can be very effective and beneficial for the physical health and care of your blue pitbull.

Blue nose are friendly with people, but they need socialization training to become very good doggy citizens. They are not always great with other dogs, but spending time around other canines in a controlled environment can ease their fears.

Proper socialization also keep others safe around your dog. When a dog is stressed and scared, one natural reaction is to snap at people.

How much do Blue nose pitbull cost?

First, think how much it will price to get your Blue nose pitbull in the first place. If you are buying a puppy from a breeder, so you expect to pay somewhere between $1,000 to over $3,000, and If you’re going to adopt, fees will be around the $200-$400 range.

Yearly vet bills may cost somewhere between $200-$400 depending on what services are performed. Grooming products, toys crate, gates and other things will add up quickly. Expect to pay around $200 for necessary items.

PuppyFind® provides a convenient and efficient means of selecting and purchasing the perfect Blue nose pitbull puppy from the comfort of your home, 24 hours a day, 7 days a week. Take advantage of our PuppySearch or leisurely browse our directory of hundreds of dog breeds, Blue nose dog breeders, Blue pitbull dogs for adoption, and Blue pitbull puppy for sale listings with photos and detailed descriptions.

Finding the best blue nose pitbull breeder is crucial. As the blue nose popularity rises, so does the number of backyard breeders hoping to make a quick sale from unsuspecting and uneducated buyers.

Call the 607-229-8737. At Blue Fire Pits, they specialize in producing some of the best XXL pits in the world! They produce pits with compact muscular frames, blocky heads, extreme muscle, high drive and excellent temperaments. They are located in Upstate, New York and have been breeding bully style pits since 2005. From where you can get the Blue nose dogs.