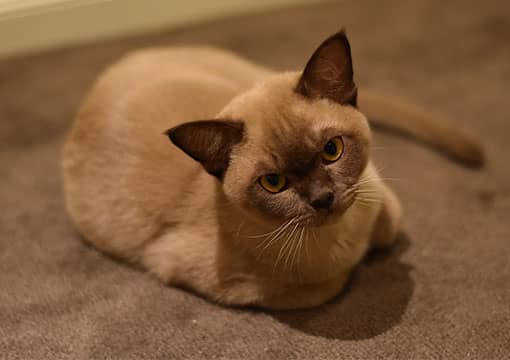 The Burmese Cats are medium-sized cats with a strong bone structure, well-developed muscles, and a surprising amount of weight for their size. This, along with a rounded head, expressive eyes, and a lovely attitude, results in a cat that is unlike any other breed.

The Burmese are referred to as a “brick wrapped in silk,” a reference to his robust, powerful build. Burmese cats thrive in the company of humans and other cats. She adores conversing, just like her Siamese forefathers, but with a much softer, sweeter tone.

According to folklore, cats of this kind were revered and honored in Myanmar’s temples and monasteries. In the late 1800s, they were discovered in England, but they were not as popular as Siamese.

The Cat Fanciers’ Association recognizes two types of this breed: Burmese and European Burmese. The Burmese were approved by the Governing Council of the Cat in 1952, which establishes criteria for cats in the United Kingdom. In 1979, the International Cat Association, a pioneer in maintaining genetic registries for cats, was recognized.

According to the Cat Fancy’s Governing Council, the breed died out in England and Europe throughout time. It was resurrected in 1930 with the use of the first real Burmese.

The Burmese are a cat that is round all over. The head is spherical, as are the tips of the ears, the eyes, jaw, and even the feet. This breed is strong and sturdy in both appearance and temperament.

The Burmese breed is unique, both physically and genetically. They are the only natural brown cat breed. Their short, smooth, glossy coat is often a deep, warm sable brown, with gold eyes.

They are Medium in stature, muscular in growth, and compact in appearance. Males may have a bigger size. They have A large, rounded chest with a level back from shoulder to tail.

Burmese cats are lively, curious, and adapt very well to change. However, as they age, some Burmese might become a little too calm, preferring to observe rather than participate in activities.

Many people believe that Burmese are fascinating, lively, and extremely intelligent, making it the perfect interactive cats for the house or any other location where humans need attention and enjoyment.

Burmese are devoted, caring cats who are usually loyal and people-oriented. Burmese will love you passionately even if you are not at your best.

They enjoy looking out the window at the environment around them, and their favorite spot is a window from where they can see the world outside. Burmese cats get along well with other Burmese, but they may not get along with other breeds.

Burmese people are extremely clever, loving, and genuine. They enjoy being around people, but they also get along with other cats and even dogs. One of their most lovable qualities is that they like doing tricks.

They quickly learn to fetch a toy in a dog-like way, earning them the name “dog-cat” when they first appeared. Although their voice is quieter than that of the Siamese, the Burmese is a sociable cat that is willing to engage in lengthy talks with its owners.

They are continually noisy, resembling their Siamese ancestors. Burmese are not as self-sufficient as other breeds and should not be left alone for lengthy periods of time.

You May Read About: Khao Manee cat

Burmese cats are medium-sized cats that range in length from 15 to 18 inches and have a compact and muscular frame.

People have frequently stated that, despite their tiny looks, they are difficult to lift.

The Burmese have an average lifetime of around 13 years, and unless in severe situations, they hardly live above the age of 18. However, there is always the potential for an exception.

One of the oldest known cats to ever live was a Burmese called Kataleena Lady. She was 27 years old when she was born in 1977.

Burmese are a rather healthy breed, but like with other cats, there are certain health issues that owners should be aware of. They can develop hypokalemia, an inherited disorder that causes skeletal muscular weakness.

How to care Burmese

Burmese coats are short and fine, with a glossy, silky sheen. They require little care and don’t shed much. Burmese are easy to groom because to their very short coats and lack of shedding.

It’s also essential to keep your cat active. Burmese are fun and energetic, and they thrive in dynamic homes with family that like playing and socializing with their pets. These animals are highly trainable.

These cats require a lot of protein and nutrients to keep up with their busy lifestyle. It is always recommended to consult with your veterinarian about food alternatives to ensure that all of your cat’s needs are addressed.

High-quality dry food is beneficial to dental health and can be supplemented with wet food if desired.

The typical price of a Burmese cat is determined by its age, pedigree, and color rarity. If you want to buy a fresh kitten from a reputable breeder, you should expect to pay between $600 and $1,000.

Burmese cats may appear in a rescue or adoption shelter in your region on occasion, but there is no assurance of finding one.

It may be able to discover a rescue organization that specialised in Burmese, Siamese, or similar breeds for a more consistent alternative.

Advantages and Disadvantages of Burmese Cat