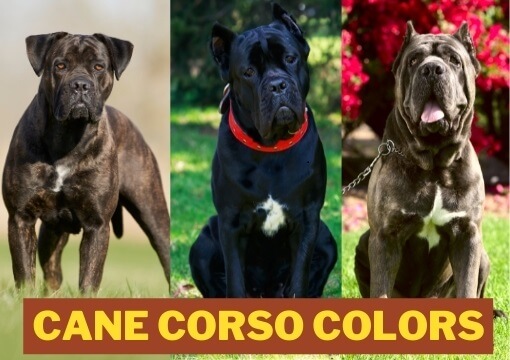 The Cane Corso is a descendant of Ancient Rome’s molossoid dogs, as per the Fédération Cynologique Internationale breed standard; it was initially identified through most of the Italian peninsula, but is now only found in Puglia, in southern Italy.

The Cane Corso Italiano is a breed with a long history, yet, for half a century, the species was nearly extinct. Because of selective breeding, the Cane Corso population has flourished since that day. The Italian Kennel Club (ENCI) acknowledged this breed in 1994, and the Federation Cynologique Internationale (FCI) officially recognized it in 2007.

The forceful and brave Cane Corso is a great guard dog because he is intelligent, easy to train, and has a royal bearing. The Corso’s ancestors reach back to ancient Rome, and the breed’s name essentially equates to bodyguard dog in Latin.

In this article we will discuss about different types of cane corso colors and their patterns.

The only approved Cane Corso colours, according to the AKC and the Federation Cynologique Internationale (FCI), are black, black brindle, grey, grey brindle, fawn, red, and chestnut.

Chocolate, liver, Isabella, and straw are the most uncommon Cane Corso colors, as they all rely on regressive genes and so occur less frequently.

Black is among the most popular Cane Corso colours since it gives the dog a more intimidating appearance. This hue is created by eumelanin, which is one of two pigments found in dogs.

Apart from their phantom-like appearance, a black Cane Corso’s black nose and brown eyes are distinguishing attributes. This dog’s appearance emanates power and might, which is why any invader would take a step back and flee at the mere sight of them.

The black Cane Corso price usually ranges from $900-$3,000. That number increases for dogs with superior lineage. A top-quality dog with exceptional breed lines generally starts at $2,500 and can go as high as $8,500.

The black brindle Cane Corso is also recognized by the AKC. The brown or red base of these dogs, as well as their black “tiger stripes,” make them stand out. Cane corsos with this coat are completely normal and do not have any genetic abnormalities.
Black Brindle Cane Corsos, according to Korec, have the largest life span of all the breed colours, with a median age of 10.4 years.

A grey Cane Corso gets its coat color from the recessive dilute gene (d), which suppresses eumelanin synthesis in the dog’s coat. Because the grey Cane Corso’s coat colour is caused by a “recessive mutation in the melanophilin (MLPH) gene,” these dogs are more prone to skin issues including mange and Color Dilution Alopecia (CDA).

Corso pups born grey do not always stay that colour and may lighten or darken as they develop. In rare cases, a puppy that seemed grey at born may develop some brindle markings as its coat changes over time.

A brindle colour Cane Corsos aren’t as common as solid grey dogs. They have a brownish natural texture, similar to the black brindle, with greyish or blue stripes. Their blotchy coat patterns are just as beautiful as those of other brindle kittens.

These paler Cane Corsos, like the black brindle, have a brown base colour with grey or blue stripes. Although less frequent than the grey Corso, the grey brindle is very straightforward to breed, with two grey brindle parents producing a litter of at least 50% grey brindle puppies.

The fawn-colored Cane Corso has been existing since the third or fourth century and is said to have been used for hunting since their light-colored coats made them difficult to spot in its native Italy’s vegetation.

The coat of a fawn Cane Corso varies in colour from cream to reddish tan. They’re often confused with the red Cane Corso, however the AKC and FCI say they’re not the same dog. Fawn Cane Corsos wear a black or grey mask that covers their entire face but does not cover their eyes.

These red-colored puppies, like the fawn Cane Corso, have a grey or black mask surrounding their eyes and earmuffs that are strongly pigmented.

Pheomelanin, a pigment found in the fur of red Cane Corsos, is responsible for their color. The density of red pigment changes according to distinct genetic routes, resulting in a variety of red colors.

The Liver or Chocolate Cane Corso is similar to the red Corso, but they are not the same. Additionally, this colour is seen as a fault by a lot of kennel association. Some believe that these unique Cane Corsos are less healthy than other Corso colours since they were developed for their distinctive coloration rather than health or behavior.

The chestnut brindle is a type of brindle that is made from breast Another striped canine variation that isn’t as popular as the black and grey brindle is the Cane Corso.

They have a brown or red base, and their stripes are a vivid reddish-brown colour. In low light, they look almost identical to the black brindle, but in natural light, the distinction is clear.

The blue fawn is the popular name for the Formentino Cane Corso. Its coat is pale beige or washed out fawn in hue, with a blue or grey tone to its nose.

Aside from its coat, the colour of this puppy’s eyes, they nearly appear to be clear, is what makes it so interesting. The blue mask and colouring on their muzzle emphasise this even more.

The Isabella Corso is classified as a major flaw by major kennel associations since it is also bred for coat colour rather than health.

Their coat is a delicate liver colour, with pink-purple mucous membranes and a pink-purple nose. Most Isabellas have green-toned hazel eyes, similar to a Chocolate Cane Corso.

You can see this video