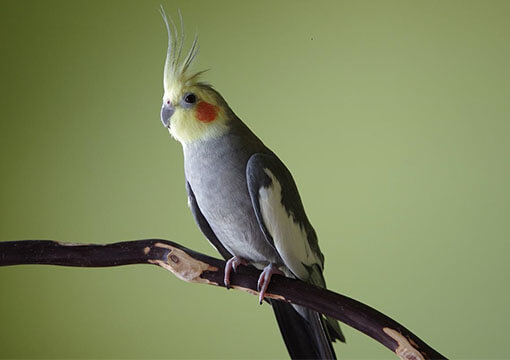 The Cockatiel Parrot (Nymphicus hollandicus), also known as the weiro bird or quarrion, is a small parrot that is indigenous to Australia and belongs to its own branch of the cockatoo family.

They’re popular as home pets and companion parrots throughout the world, and they’re reasonably simple to breed. Cockatiels are the most popular caged bird, second only to the budgerigar.

A cockatiel is a popular bird to have as a pet. It’s a little parrot with a head crest and a range of color patterns. They are both gorgeous and friendly. Cockatiels are easier to care for and tame than other parrot species due to their tiny size.

Cockatiels are known as quarrions or weiros in their native Australia. They live largely in the Outback, an area in Australia’s northwestern corner. They are members of the cockatoo family, having been discovered in 1770. They share a lot of the same characteristics and behaviors as the larger bird. They live in big flocks in the wild.

During the 1900s, cockatiels were popular as pets. Their docile, pleasant personalities make them a good fit for home living, and they are easy to reproduce in captivity. Trapping and exporting these birds is no longer possible in Australia. They’ve been tamed for years; the cockatiel’s popularity should come as no surprise.

The cockatiel has a grey body with an orange cheek patch and a yellow face and crest. The hues on the males face are brighter and more vivid. The females tail feathers have bars on the underside.

The Weiro bird is a short bird with a high tail and crest, and the males have grey plumage with white patches on the wings and black cheeks rimmed in white in their natural habitat. Females have a grayer complexion, less vibrant cheeks, and no white border.

Cockatiels have yellow heads and orange circles on their cheeks and are dark brown or grey in color. Feathers in males are more vibrantly colored than those in females.

Cockatiels can generally be boarded more easily than other birds due to their smaller size and quiet disposition, potentially making them more desirable to pet parents who enjoy traveling.

Cockatiels are the tiniest cockatoos, measuring just 12 or 13 inches from head to tail. Between two and four ounces is considered a healthy weight.

Cockatiels whistle and vocalize, but not as loudly as some other parrots. Males have a reputation for being better at imitating speech and whistling. Female cockatiels, on the other hand, are no slouches when it comes to mimicking.

Pet cockatiels make a variety of noises, including a random chirp, a repeating warble, a lengthy, drawn-out wolf whistle, a piercing squawk, sporadic chirps, an elaborate whistle serenade, and a soft cheep while asleep. Cockatiels, like other parrots, are born communicators.

Cockatiels are sweet and loving, and they enjoy being handled and held. They aren’t always fond of being cuddled. They simply want to be close to you, and they will be overjoyed to see you.

Cockatiels are usually sociable, but an untamed bird may bite. Because these birds strive to please, you can prevent undesirable habits from developing at a young age by ignoring bad conduct. Never chastise the bird; it will develop a fear of people if you do. Reward positive conduct while ignoring the poor.

Cockatiels are clever birds that can pick up a variety of skills with practice. They’re clever young birds who will relish a new challenge, from waving and whistling to bell ringing.

A cockatiel’s lifespan in the wild can range from 10 to 14 years, and it can be considerably longer if kept as a pet. A properly cared-for bird can live for more than 30 years.

Cockatiels are available in a variety of pricing ranges. Hues like lutino, for example, are more expensive than colors like plum or cinnamon.

When choosing a bird, go for a hand-fed baby or at the very least a young bird who has been handled frequently.

Prices vary with color, and you should expect to pay a little more if you buy from a responsible breeder. A well-handled juvenile bird might cost anywhere between $100 and $300.

The cockatiel parrot is found across Australia, particularly in inland locations with access to fresh water. Grassland, scrubland, savannas, or open areas with acacia shrubs are ideal habitats. They live in cities and can be observed perching on electrical wires in flocks.

Within their range, this species can be found in a number of habitats. Water sources, such as lakes or rivers, in close proximity to open regions or woodlands, are their preferred environments.

Their preferred habitats are grasslands and savannas, but they sometimes exist in open woods. They prefer inland settings, which are typically arid or semi-arid with limited rainfall.

Nutritional inadequacy is the most prevalent health problem that cockatiels face. Preventing malnutrition requires vitamins and minerals provided in fruits, vegetables, and a pellet-based diet.

Fatty liver disease is common in cockatiels, which is caused by a high-energy diet high in carbohydrates and fat, as well as little or no exercise.

To avoid your cockatiel from contracting the disease, feed it a varied diet and keep it away from insecticides, pesticide residue on fruits and vegetables, and cleaning supply odors.

Cockatiel parrots, like any other parrot, benefit from variety in their food. Seeds are nutrient-dense food, but they are also high in fat. Seeds should account for no more than 30% of the bird’s diet.

Offer a variety of fresh vegetables and fruit to ensure that your bird gets all of the nutrition it needs. A cockatiel eats roughly 1 tablespoon of food every day on average. This is why the contents of that tablespoon are so important.

Cockatiels are natural foragers who eat grass seeds, fruits, and plants in the wild. In a bowl, place fresh fruits and veggies. Remove any food that your bird hasn’t eaten after an hour; don’t feed your bird spoiled food.

Activities will make a cockatiel happy and assist preserve its physical and mental health, just as they will any other parrot. If your bird spends the majority of its time in a cage, make sure it’s big enough for it to fly out of.

Provide a variety of toys to encourage the bird’s natural desire to play. Perches, ladders, and toys should be plentiful, but not to the point where the bird’s ability to roam around the cage is hampered.

Give your cockatiel at least an hour outside the cage if possible. Out-of-cage time helps with socialization and allows the bird to stretch its wings, however it is not as important as it is with other parrots.