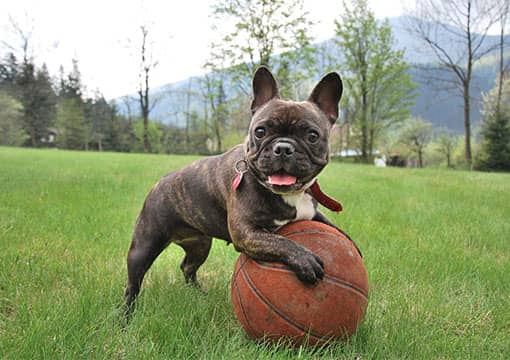 The French bulldog is a robust, compact dog breed that originated in France and has a huge head, short snout, and bat-like ears. This breed is vivacious, affectionate, and playful. The French bulldog is a smaller, distant relative of the English bulldog; while the two breeds share some traits, each has its own personality.

The French bulldog is a sweet, friendly dog that makes an excellent pet for any family. Their diminutive stature allows them to fit into smaller spaces, yet they are more durable than small dogs. This is a loyal, intelligent breed that gets along well with children and other animals. The Frenchie is a happy and sociable canine companion.

Toy collectors in France Bulldogs with upright ears, which were once deemed undesirable in England, were readily welcomed by English bulldogs. It’s probable that other breeds, such as terriers and pugs, contributed to the bloodlines of the French bulldog.

The French bulldog has long been regarded as a loyal friend and excellent lap dog. The American Kennel Club recognized the breed in 1898, and it has grown in popularity since then, becoming a top 10 breed in the United Kingdom, Australia, and the United States in recent years.

The French Bulldog is the epitome of a small dog with a big personality, being quirky, playful, and full of energy. Their small size and playful nature make them excellent playmates for children, but as with all breeds, they must be closely supervised.

French Bulldogs are suitable for households with or without children and can become a member of the family. The French Bulldog is a curious and playful breed that rarely barks. French Bulldogs can get along with other dogs and even cats with proper introductions and socialization.

This breed has a laid-back demeanor and makes excellent companions for families, children, and senior citizens. They’re easy to groom and delight, and they enjoy human interaction.

The French Bulldog, like many other companion dog breeds, necessitates frequent human interaction. They may develop separation anxiety if left alone for more than a few hours. These dogs are contained in almost any type of home and do not require a large yard.

French Bulldogs are frequently kept as pets. It can cohabit with various breeds and is patient and affectionate with its owners. Even though they have a tendency to be stubborn, French Bulldogs are amiable canines who are people-oriented. This makes them easy to train.

Size and appearance of French Bulldog

How big is a Frenchie?

The French bulldog isn’t just a small bulldog. The “bat” ear is the most distinguishing feature, which occurs naturally and is never clipped or altered. The breed’s skull, which is flat between the ears, is also distinctive.

The French bulldog has a flat, short coat and is compact and muscular. Fawn, white, and brindle varieties are common colors in the breed. The male and female dogs weigh between 25 and 27 pounds.

The French Bulldog is a compact, muscular, and heavy-boned dog with a medium or small build. Their attentive and inquisitive expression betrays their intelligence and interest. The head is broad and square, with bat-like ears. Above its exceedingly short nose, there are deep wrinkles in the skin.

Frenchies have a short hair coat that sheds very little. White, cream, fawn, or any mixes of the foregoing are acceptable hair coat colors according to the AKC. Brindle, piebald, black masks, black shadings, and white markings are among the markings and patterns.

Heatstroke, recurrent allergic sneeze fits, ear infections, and respiratory problems are just a few of the health conditions that French bulldogs are susceptible to.

With this disease, dogs endure significant discomfort and inflammation in the spinal cord, and pet owners may need to lift their food and water dishes to a higher height to avoid placing further pressure on their spine.

Although French Bulldogs enjoy long and happy lives, they are susceptible to respiratory difficulties as well as other joints, skin, and health issues. Because some of these disorders might be lifetime and expensive to treat, it’s critical to think about the length of time policies cover different conditions when buying dog insurance.

How To Take Care of French Bulldog

A minimum of one hour of exercise each day is required for French Bulldogs, but this does not have to be done in one sitting. They can do well with small walks spread throughout the day, but keep an eye on how much they push themselves. When the weather gets warmer, they may have respiratory problems.

Because they don’t require a lot of space, French Bulldogs do well in apartments. A couple of 10-15 minute walks per day will suffice to meet their exercise requirements. Frenchies, as a brachycephalic breed, cannot withstand severe temperatures.

They are susceptible to heat stress. They should be in cool and comfortable surroundings. On a hot day, an air-conditioned space may be required.

It is an important and valuable way to taking care of your French bulldog. Like all dog breeds, This mix breed needs to go to the vet once per year for a checkup.

Vaccinating your pet has long been regarded as one of the most straightforward approaches to assist him to live a long, healthy life. Puppies are typically vaccinated at 8 and 10 weeks; your young Frenchie should then be given a booster 12 months after their first vaccination because it’s beneficial to take care of any pets.

Frenchies are smooth-coated canines with a moderate amount of shedding. Basic grooming, including weekly brushing, is all that is required of the breed. In the spring and fall, they lose their undercoat, so owners should brush them frequently during those seasons.

Baths with skin-soothing shampoo and regular ear cleaning may help if Frenchie has skin problems. The deep skin folds may require some attention to remove debris with a damp cloth or baby wipe, then be properly dried.

To keep your dog’s nails from cracking or splitting, trim them every few weeks. Brushing its teeth two to three times a week is recommended for preventative oral hygiene.

Each dog is individual and, therefore, will need a particular diet.  Since the French bulldog is inclined to hip and elbow dysplasia, provide him food enriched with fish oil, glucosamine, and chondroitin.  It is necessary to evade over feeding your dog as it can only exasperate health obstacles such as elbow and hip dysplasia. Your most essential purpose should be to provide your pet companion properly.

The French bulldog is a big dog, so going for the best big breed dry dog food may be the correct choice. If, upon all benefits, your dog turned out small, search for one of the greatest dry dog food for small dogs and see if they like it!

Here we list out some of the best good dog food for Frenchie.

Remember that some of the smallest breeds have the most refined taste. Even though your French bulldog is big, we’re sure your puppy won’t mind taking a bite of these best dry dog food brands for Pugs!

How To Train Frenchie

Early socialization and puppy training sessions are essential for Frenchies. They should be exposed to a variety of people, animals, sounds, and odors so that they may quickly adapt to different settings later in life.

The puppy’s socialization period should be filled with favorable encounters. Puppy training lessons can also aid in the socialization of puppies and the promotion of good conduct.

These dogs are generally easy to train, they can be stubborn. They can, however, produce excellent outcomes if they are coached with a positive attitude. Frenchies are known for their ability to learn quickly. Maintain a relaxed demeanor while training to get the most out of it.

Potty training your French bulldog puppy can take a lot of time, patience, and attention, but luckily, one tool can make a huge difference: a potty training pad.

If you’re planning on crate training, your puppy should be placed to bed every night in its crate. However, you may require thinking of the best place for that crate at the beginning.

French bulldog puppy might produce aggressive behaviors and severe anxiety if you do not enforce the early socialization. In the method of early socialization, you will present the puppy to different objects, people, and areas as advanced as possible.

There are two stages of this process. The first one initiates as early as 2 and 1/2 weeks. From this period of time up to four weeks of age, the buyers will hold the dog in a listed amount of time. The second stage of socialization begins from four weeks of age to 16 weeks of age. You will let the dog become familiar with neighboring formations and smells.

How Much Do Frenchie Cost?

The cost of a French Bulldog is determined by a number of criteria, including the breed’s standard, location, breed lines, color, and other characteristics. Always deal with a trustworthy breeder and ensure that the French Bulldog puppy’s parents are both healthy.

It is recommended that these puppies be purchased from a home-bred litter or from reputable breeders or businesses. Buying from puppy mills, animal farms, or puppy farms is never a good idea. Never buy from a puppy mill, an animal farm, or a mill.

If you have a pet or want to have one in the near future, you will undoubtedly come to a moment where you will be looking for genuine guidance or assistance. Every time you see something unusual about your pet, you’ll need to contact a veterinarian or a pet counselor.

While there are many competent French bulldog breeders throughout the country, this breed can also be found in local shelters and breed-specific rescues. If you want to adopt a Frenchie from a breeder, make sure they can supply you with medical records and references for their pups.

If you think a French bulldog would be the appropriate dog for you, do your homework before committing to your new best friend. To learn more, talk to other Frenchie owners, trustworthy breeders, and rescue organizations.

Advantage and disadvantages of French Bulldog