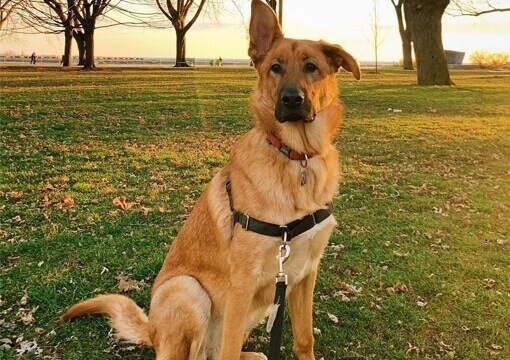 The Golden Shepherd is a cross-breed dog that is a mix between a Golden Retriever and a German shepherd. These pups are large, energetic, and loyal, inheriting some of their parents’ finest traits. For a variety of reasons, this endearing hybrid breed is gaining popularity in the United States.

These dogs are protective of their family members while still being nice to humans, children, and other dogs. However, don’t leave them alone for lengthy periods of time, as they may grow bored and destructive.

The American Kennel Club (AKC) and other major kennel club’s do not recognize the Golden Shepherd hybrid.  The Golden retriever German shepherd mix breed may have existed naturally for many years, but it was only in 2009 that this exact mix breed gained popularity.

The Golden Retriever was developed in Scotland in the mid-nineteenth century. It was created at Guisachan, the highland estate of Dudley Marjoribanks, 1st Baron Tweedmouth, near Glen Affric in Scotland. It is claimed that the breed descended from the now-extinct Russian tracker dog.

It was created at Guisachan, the highland estate of Dudley Marjoribanks, 1st Baron Tweed mouth, near Glen Affric in Scotland. It is claimed that the breed descended from the now-extinct Russian tracker dog.

In the late 1800s, the German shepherd was born in Germany. The German Shepherd was developed by breeding the most intelligent, attentive, and obedient native shepherd dogs in Germany. This breed was in charge of herding sheep and defending flocks from predators.

Golden retriever German shepherd mix make wonderful family pets and watchdogs. They are naturally protective and will alarm if outsiders approach. They may be distant with persons who aren’t related. However, once they become friends with you, you will have a friend for life.

They are not suitable as city pets since they require a yard to run about in and exercise. These dogs will require an energetic owner who can keep up with their high activity levels. Daily walks or retrieve games are required minimums to protect this breed from becoming destructive.

Temperament of a Golden Shepherd

The German Shepherd parent has a bad reputation for being aggressive, which is mostly incorrect. When mixed with the gentle Golden Retriever, the hybrid’s behavior can be reduced. Nonetheless, he is very vigilant and may be cautious with strangers, making him an excellent watchdog.

The active Golden retriever german shepherd mix is descended from two extremely intelligent breeds noted for their devotion to their masters and human group. They thrive on human connection and want to be engaged in all events, especially those that take place outside.

Golden retriever gsd mix may take some time to establish friends, but once he does, he is quite loyal. He has a strong desire to please, is highly intelligent, and is readily trainable. He does not, however, fare well when left alone for extended periods of time. He requires interaction from his family and may bark or chew excessively if bored.

Size of a golden shepherd

German shepherd golden retriever mix come in a variety of colors, including black, tan, red, cream, and blue. Their coats are sometimes solid color, and other times a combination of colors. The ears are rather big and stand upright. The back is flat and strong, with a bushy tail that slopes downward.

The Golden Shephed mixed breed is prone to some of the same health issues as the German Shepherd and Golden Retriever. While most are typically healthy, some may be prone to a few health concerns, which is why excellent care and frequent veterinarian exams are essential.

The following are some of the most frequent health issues that German shepherd golden retriever mixs face:

Hips and elbows Dysplasia, as well as intestinal problems, joint problems are a worry with the Golden retriever German shepherd mix, as are some malignancies that the Golden may bring.

Other problems that may arise include Von Willebrand’s disease and digestive difficulties such as bloat. But, before you give up on this overwhelming list, keep in mind that your child may never face any of these issues in his life. It is just preferable to be informed ahead of time.

How long can a Golden Shepherd live?

Your German shepherd golden retriever mix will live a long and healthy life of between 10 and 14 years if he gets regular exercise, eats high-quality food tailored for his age and size, and has regular check-ups with your vet.

How should a German shepherd golden retriever mix be cared for?

Taking care is an essential and beneficial aspect for your Golden Shepherd. Proper care will entail many phases that will all work together to preserve outstanding health and encourage learning and healthy behavioral patterns.

If they are not actively involved in dealing with livestock or another sort of labour, these dogs require some daily exercise.

This big boy needs at least 1 to 2 hours of vigorous activity every day to stay happy and healthy.

He comes from two hardworking parent breeds, and lazing around all day is simply not an option for him.

Walking, running, and climbing are excellent alternatives, as are activities that require him to think and use his agility abilities, such as chasing a tossed ball in the yard, which helps him to demonstrate his ability to accept orders.

Golden Shepherd coats are frequently a cross between the coats and color of their German shepherd and Golden Retriever parents. German shepherd golden retriever mixs come in a variety of shades, including black, tan, red, cream, and blue. Their coats are sometimes solid hues, and other times a combination of colors.

They have medium-length, thick coats, and while they are not a suitable choice for allergy patients, their coats are quite easy to care for. A decent brushing once a week should suffice, and washing with a light shampoo every few months is advised. Bathing too frequently might deplete the coat’s natural oils.

In general, all dogs should get a full physical check-up at least once a year. Consider it routine maintenance for your dog. These wellness checks allow you to monitor your dog’s growth and development and discuss any problems with your veterinarian. Most importantly, yearly physicals are a vital component of preventative care.

Your German shepherd golden retriever mix will require regular visits to the veterinarian During his first few months, After that, you should take him or her around once a year and as needed for any problems your dog may be experiencing.

Before going into the specific qualities that are desirable in a Golden retriever German shepherd mix meal, it is necessary to first list some of the components and attributes that characterize all high-quality dog foods and are ideal when choosing a food for any breed.

Here are excellent choices for feeding your golden retriever GSD mix. Take note of the variations between these alternatives and attempt to choose the one that best fits your dog and her specific demands.

A well- grown Golden retriever German shepherd mix will require 3 to 5 cups of high-quality dry food each day. The correct amount will be determined by the dog’s age, size, and activity level.

If your dog is prone to bloating, consider using a slow feeder dish or dividing the meals into many per day. If the dog begins to exhibit allergic responses or gastrointestinal issues, you should modify the diet and attempt to find a meal that works for him.

The Golden retriever and German shepherd mix is a trainable and energetic dog who seeks to obey all of its owner’s instructions. It responds well to a strong, firm leader who uses a regular, predictable training technique.

Potty training for the Golden Shepherds

Potty training for a golden retriever german shepherd mix is similar to that of other dogs. These dogs, like all other dog breeds, require patience and perseverance.

It’s exciting to welcome a new golden shepherd puppy into your home, but a new puppy also brings with it many new difficulties. Potty training is the first and most difficult task you face.

Training this Golden retriever German shepherd mix dog can be frustrating, tedious and time consuming, but it is an important part of training your puppy.

Potty Training Your German Golden Retriever Mix Puppy can take a lot of time, patience and focus, but there is one product (potty training pad) that can help a lot.

Before you start your German shepherd golden retriever mix crate training, you need to know if the Golden Shepherd is not against crates.

You won’t be able to achieve the best results if you try to crate train your Golden retriever German shepherd mix dog in a small, uncomfortable crate. It is important for the dog owners to know that the crate needs to be soft and the right fit. Because your dog will spend the most of its time in the crate, it must be flawless.

How much does a golden shepherd puppy cost?

This is dependent on where you purchase the dog and its bloodline. The price of a Golden retriever German shepherd generally varies from $500 to $800, although it may reach as high as $1500.

The good news is that breeders may be found almost anywhere! Golden Retriever Shepherd Mixes may be found in Michigan, Oregon, Ohio, Illinois, California, and other states in the United States. Also in Canada and the United Kingdom.

Where you can buy Golden shepherd?

Pros of the golden shepherd

Best Names for the Golden Shepherd

Is a golden shepherd a good dog?

These dogs are protective of their loved ones and friendly with people, children, and other dogs. As long as you can meet their extreme physical needs, then the Golden Shepherd is a fairly easy to care for breed. They are well suited to most homes and are great for most families.

What is mix of golden retriever and GSD ?

How much does a golden shepherd cost?

Is it easy to train Golden Shepherds?

Because they combine the intelligence of a German Shepherd with the people-pleasing desire of a Golden Retriever, golden retriever and GSDs are fairly simple to train. The dogs are fast to pick up on orders and respond nicely to them. Start teaching them early because they are big dogs.