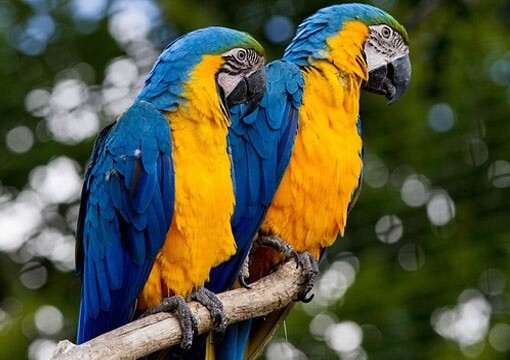 Macaw parrot is a one kinds of parrot comes in group of New World parrots that are long-tailed and often colorful. They are large, elegant birds that belong to the parrot family. Macaws are socially intelligent birds.

Macaws are among the most well-known members of the parrot family (Psittacidae). These colorful and amusing birds have been kept as pets for centuries.

They can use vocalizations to communicate with the rest of the flock. Some of them can even speak in human tones. A well-socialized macaw can be a loving and affectionate companion despite its huge beaks.

Macaws are native to North America’s southern half (Mexico), as well as Central and South America. Evidence suggests that the Caribbean once contained local macaw species such as the Cuban macaw and the Saint Croix macaw, both of which are now extinct.

They can be found in rainforests, meadows, and grassy woodland environments. Macaws and other parrot species native to the Amazon basin, such as Peru, have been recorded feeding on clay licks, which researchers believe is a means for the parrots to neutralize poisons inherent in some of the wild foods they eat.

Macaw parrots are found in 17 different types. Like pets, however, only large and colorful Macaws are traded. Mini Macaws are difficult to get by. Small parrots include Yellow-collared macaws, Illiger’s, and Hahn’s.

Scarlet, Blue and Gold, Military, and Hyacinth are the most common Macaw pet parrots. The rainbow macaw, also known as Catalina, is the most colorful member of the Macaw family.

It’s difficult to tell whether a Macaw is male or female merely by looking at it. Because they are dimorphic, only genetic testing can determine their gender.

Macaw parrots have the ability to sing. If they aren’t trained, they can be incredibly loud and yell.

These birds have the ability to imitate human speech. Their voice, however, is not as clear as that of other birds.

Blue and Gold Macaws are the most vocal of all the huge Macaws. The Hahn’s Macaw has a better vocalization than the other small Macaws.

Macaw parrots are energetic, playful, and extremely active. They can make long-lived companions if fed a nutrient-rich diet and given ample space for physical activity.

These birds are caring and affectionate. They may acquire a strong desire for their owner’s attention once they’ve formed a link with them.

They can become aggressive and destructive if left alone or not properly cared for. Aggression can also be triggered by drastic environmental changes, such as confining them in a small place.

To be active, macaw parrots seek mental and physical stimuli. They can be taught to socialize as early as infancy.

Hyacinth macaws Andorhynchus hyacinthinus in the care of humans have a median life expectancy of about 25 years.

Macaws can be found in Mexico, Central America, and South America. Rainforests, grasslands, and grassy woodland-type settings are the most prevalent habitats for these colorful birds.

To neutralize poisons acquired when dining in the wild, macaws and other parrot species eat mud on exposed river banks. Some Macaw species have become extinct in recent years.

Feather-destructive behaviors are common in macaws. Boredom and/or a lack of mental stimulation might be a cause if a full veterinary evaluation rules out physiological causes of feather plucking.

Provide macaw with a stimulating habitat that includes climbing nets and ropes, as well as toys, for play and exercise.

Regular health examinations by an avian veterinarian can aid in the early detection and treatment of numerous disease processes.

A macaw’s nares are cleared of dust or dander by sneezing several times a day, which may be followed by a clear discharge. Contact your veterinarian if the sneezing continues and/or the discharge is not clear.

Macaws have a different diet and require different care than other parrots. Macaws in the wild or in their natural habitat require more fat to fly through jungles, nest and obtain food.

In the wild, macaws eat figs, leaves, nectar, local fruits, seeds, flowers, and riverbank clay. If you want to keep a Macaw as a pet, here are some food and care suggestions:

Avocado, lettuce, and apple seeds are poisonous to macaws. Furthermore, they may become ill as a result of consuming spoiled food. Remove any remaining food from the aviary as soon as can.

The Macaws are kept healthy by the availability of freshwater. Vitamin supplements can also be added to their drink. Vitamins, on the other hand, should not be given more than twice a week.

Giving calcium and vitamin supplements to macaws throughout their first year can also help them stay healthy. Bird warmers should be provided to macaw parrots every three months.

In comparison to captive macaws, wild macaws are more physically active. They go on the hunt for food and water, which allows them to get enough exercise and expend their energy.

Natural branches, among other things, are included in these toys. Different shapes and sizes of branches can assist Macaws practice holding and eating the bark with their foot and beak.