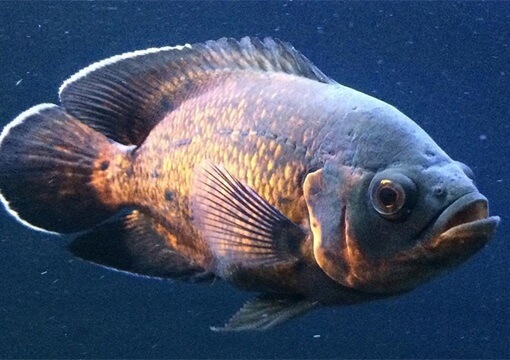 The oscar fish, also known as the tiger oscar, velvet cichlid, or marble cichlid, is a cichlid fish that comes in a variety of common names.  The oscar fish isn’t the only fish that range has grown since it became popular as an aquarium species.

Oscar Cichlid fish is an immensely popular tropical freshwater fish This species was first described from the Amazon basin of South America. It is a popular aquarium fish in Europe and the United States. Their popularity is primarily due to their cognitive levels, their lively demeanour, and their gorgeous colorings.

They’re a popular food fish in South American markets, and they’ve also made their way to Asia, Australia, and North America. In many US states where fish have been released into the wild, they have been classified as a non-native pest species.

Thay are big fish recognized for their incredible intelligence and distinct personalities. These stunning fish may grow to measure approximately a foot, and capture the attention of anybody passes by their aquarium.

Oscar fish come in a wide variety of colors and patterns as an aquarium species.

Here we discuss most popular types of Oscar fish that you can find for sale in your local fish store or online.

Tiger Oscar – The “tiger oscar,” which is extremely close to the wild oscar. One of the most popular Oscars is the Tiger Oscar. The Tiger Oscar, also known as the Velvet Cichlid or Marble Cichlid, is a brightly coloured addition to any aquarium.

Lemon Oscar – Lemon Oscars are sometimes mistaken with the species’ White or Albino varieties. The Lemon Oscar is a beautiful colour variation of the Oscar cichlid, which is highly popular.

A bright appearance is achieved by combining vibrant lemon yellow colouring with an opaque, cream-white body.

The Lemon Oscar will spawn in either soft or hard water as long as it is clean, bright, and between 79 and 86 degrees Fahrenheit.

Black Oscar – Black Oscars are one of the finest looking fish out there. Their color is mostly black with light bands running across their body. A lighter belly is also possible in some species. As the names suggest, Black Oscar’s body is mostly black in color.

Florida Oscar – The Florida Oscar Fish resembles the Tiger Oscar in appearance, although they are darker in color. The consistency and quality of their diet has a significant impact on their appearance. This is where all the differences arise: poor quality water and diet cause the coloration to fade over time. 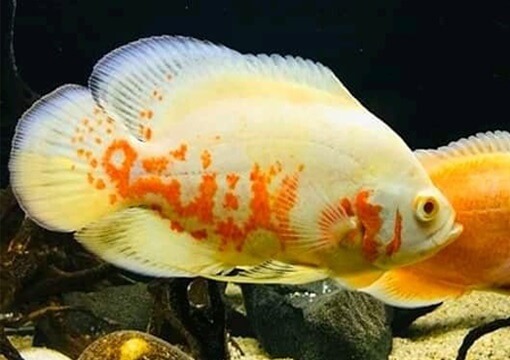 Red Oscar fish – Red Oscars are another popular variety of the species and can be easily identified by their bi-colored looks. These fish are a mix of bright scarlet red and black, with both hues mixing flawlessly over the fish’s back. Red Oscars have black fins and slightly protrude orange-rimmed eyes.

Veil Tail Oscar – The difference is the Veil Tail Oscar has a longer tail than regular Oscar Fish. Oscars with Veil Tails are a particularly stunning variant of these stunning cichlids. The tail is likewise covered with bright orange markings that go all the way to the top of the fish’s head.

Albino Oscar – With the exception of their pattern, Albino Oscars are almost totally white. The body of the Lutino Oscar Fish is slightly yellowish. As a small juvenile, the Albino type is often bashful and seeks the company of others.

Blue Oscar – Blue scar is a cross breed of oscar fish. These stunning fish are nestled in almost contrasting blue shades. This fish is generally hardy and easy to care for as long as it is kept in a well-filtered aquarium.

Copper Oscar – Copper Oscars are stunning fish with a dark grey to black base color with a coppery orange color toward the back of the body. The fins are typically dark grey to black in color. These color variations were generated artificially and are among the most unique color morphs available.

White Oscar – The White Oscar is often confused with the Albino variety. This color easily blends in with the rest of their body and makes it appear almost like these fish are white from head to tail.

How to tack care Oscar ?

If you are thinking of buying Oscar fish, you need to know how to take care it. Here we suggest all of things to taking care of the Aquarium fish.

Due to their big size, It is necessary that you have a large enough tank for the Oscar fish to grow and thrive in. To avoid causing extra stress to the fish, an Oscars tank should be no less than 55 gallons per fish.

Oscars enjoy jumping and will occasionally jump right out of the tank. In fact, if the top isn’t tight enough, a medium-sized Oscar can lift it right off the tank. To avoid this, use a lid that fits comfortably over the top of your aquarium.

Oscars are highly sensitive to changes in water temperature as well as changes in ammonia levels. This Fish like a pH balance of 6 to 8 and a temperature range of 75 to 80 degrees Fahrenheit (23 – 27 degrees Celsius). They may handle a broad range of hardness levels, however we recommend maintaining it between 12dH and 15dH.

This fish are native to warmer, tropical climates. They require tank water to be maintained between 72 and 77 degrees Fahrenheit. This may be accomplished by using an aquarium heater set to the right temperatures.

A high-quality charcoal filtration system is vital for all home aquariums, but it is especially critical for Oscar due to the amount of waste they generate.

Oscars are very generous when it comes to their diet. They will eat almost anything that you put inside their tank.

Oscars will eat a wide variety of insects and crustaceans. Occasionally, you may provide live food and feeder fish like Goldfish or Rosy Red Minnows to your Oscars.

A commercial cichlid pellet with whole fish, krill, or shrimp in the ingredients list should account for about 80% of Oscar’s diet. Oscars eat mostly small insects and crabs in the wild, therefore they require a meat-based diet.

Hole in the head disease is not particularly hard to treat, but the earlier that you spot any symptoms, the easier it will be.

Oscar fish may live for up to 18 years in the wild. Oscar often live for 8 to 12 years in captivity. Oscar fish in captivity have a life expectancy that is determined by the care they get and the tank environment.

How Much Does Oscar Fish Cost?

The cost of the fish is heavily influenced by the diversity and size of the individual animals. So, for one fish, you may expect to pay anything from $8 to $100. If you buy something online, keep in mind that you will almost certainly have to pay for shipping.

Oscars are they violent fish?

Oscar fish is considered to be a highly aggressive fish, so keep any small fish away from the Oscar fish tank. Apart from that, Oscar is one of the most intelligent fish in the aquarium hobby.

What fish can live with Oscars?

The best species for Oscar tank mates are catfish, Silver Dollar fish, Firemouth cichlids, Convict cichlids and blue acara. Larger cichlids, such as Texas cichlids and terrors, should be avoided since they are prone to aggressiveness in the tank.

Thanks for reading our article if you have any questions or any suggestions please free feel the comments below.