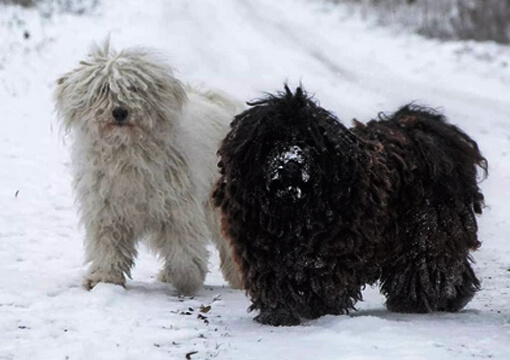 In this day there are very difficult to count a number on the amount of dog breeds that exist around the world. From the miniature Chihuahua to the big great Dane, there are number of breeds to choose from when seeking the correct canine companion. However, no matter how many mutts you think you recognize, there here are some lesser-known dogs which you may have never even heard of.

Here we list out top 10 Strangest Dog Breeds In the world.

The Komondor is also known as the Hungarian sheepdog, is a large, white-coloured Hungarian breed of livestock guardian dog with a long, corded coat. The Komondor is among the world’s most recognizable breeds. The independent and protective Kom requires a firm, experienced hand at training.

The Lagotto Romagnolo is an Italian breed of dog. The name derives from Romagnol can lagòt, meaning “water dog”. They are small to medium-sized dog, well proportioned, powerfully built, of a rustic appearance, with a dense, curly coat of woolly texture.

The Mudi is a herding dog breed from Hungary. It’s an extremely versatile, intelligent, alert, agile, all-purpose Hungarian farm dog. His courage is useful for working the most stubborn livestock. The breed is a loyal protector of property and family members without being overly aggressive.

The Chinese Crested is a hairless dog breed. With their spotted pink skin, spiky “crested” hairdo, furry socks and feathery tail, you can’t mistake the sweet and slender Chinese Crested for any other breed. This frolicsome, ultra-affectionate companion dog is truly a breed apart. The Hairless variety can vary in amount of body hair. Hair on the muzzle, known as a beard, is not uncommon.

The origin of the Lowchen is unclear, it is believed that the breed may have been developed in Eastern Europe between Russia and the Mediterranean. A small, bright, and lively dog that originated as a companion breed in pre-Renaissance Europe where ladies of the court groomed it in the likeness of a little lion.

The Affenpinscher are loyal, curious, and famously amusing; this almost-human toy dog is fearless out of all proportion to his size. It’s also known as the Monkey Terrier, is a terrier-like toy Pinscher breed of dog.

Graceful terriers in sheep’s clothing, Bedlington Terriers, named for the English mining shire where they were first bred, are genial housemates, alert watchdogs, versatile athletes, and irresistibly cuddly TV-time companions. The Bedlington Terrier has been described as resembling a lamb. It has also been compared to a miniature version of the Scottish Deerhound.

The Puli is a small-medium breed of Hungarian herding and livestock guarding dog known for its long, corded coat. This is a breed that needs to be kept mentally active. Pulik are incredibly intelligent, agile, and loyal, which makes them able to learn quickly, and they strive to please their owners.

The Xoloitzcuintle, or Xolo, also known as the Mexican hairless dog, is one of several breeds of hairless dog. The Xoloitzcuintli is a very ancient Latin American breed, dating back to before the time of the Aztec Empire and its existence can be substantiated for as far back as three thousand years. Xolos need a consistent training regimen and clearly defined boundaries. Early socialization and puppy training classes are vital and help to ensure that the dog grows into a well-adjusted, well-mannered companion.