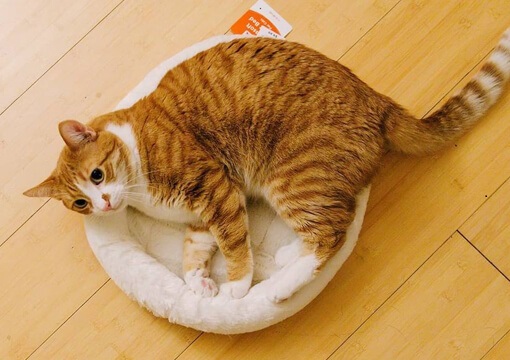 Some people consider that tabby cats are a particular breed, but actually Tabby refers to the coat pattern, which can be present on lots of different breeds.

Tabby cats are often mistakenly thought of as being a particular breed of cat, but it is the coat pattern that is known as “tabby.”

This cat is a domestic cat with a distinctive ‘M’ shaped mark on its forehead. They are considered to be very outgoing, but pretty much any domestic house cat. Tabby cats are the friendliest and socially interactive pets out there.

The name tabby is believed to have come from the word atabi a type of silk spun in the Attabiah region of Baghdad. Since the tabby pattern is a common wild type, it might be assumed that medieval cats were tabby’s.

In mid-17th century, the natural philosopher John Aubrey noted that William Laud, the Archbishop of Canterbury was “a great lover of Cats” and “was presented with some Cyprus-cats, i.e. like Tabby-Cats”.

This cat is one on the most common coat colours, the tabby pattern dates back to domestic cats in ancient Egypt.

The tabby pattern occurs naturally and is connected both to the coat of the domestic cat’s direct ancestor and to those of their close relatives like the African wildcat, European wildcat, and the Asiatic wildcat.

They are considered very friendly, intelligent, very affectionate, happy-go-lucky, sassy and wonderful companions. They’re rather playful but can get moody sometimes.

These felines are smart and sociable. They won’t run and hide under the bed when strangers come over. Tabbies are considered to be very outgoing, but It’s pretty much any domestic house cat. They are more intelligent and social cat.

They really enjoy chasing mice and other rodents, and if there aren’t any around to chase, they’re happy chasing after toys.

Domestic cats occur in many habitat types because of their association with humans. Tabbies do best in areas where winters are not severely cold. They are found in areas where humans live, but usually rural areas where the main form of agriculture is grazing livestock.

Classic tabby cat each have a light-colored “butterfly” pattern on the shoulders and three thin stripes running along the spine. Classic tabbies have thick stripes, bands and/or bars on the legs, tail, and cheeks.

Size of these cats varies according to their breed. Regardless of any particular breed, an adult tabby cat with a weight exceeding 18 pounds is unusual.

The color and shape of these cats vary according to the breed, as does the size and form of the ear.

Most of the breeds of these cats have tapered tails which are lightly lined with soft fur, though certain tabby cat breeds have bushier, hairier tails and others have narrow, strong, whip-like tails.

Tabby fantastic pets, especially for children, because of how social and friendly they are. They love participating in family activities and thrive on being around their human families and other cats or dogs in your home.

Thay live indoors have longer life expectancies and are easier to train. They can be indoor cats. Keeping a tabby cat indoors protects them from injuries, dehydration, fleas, and potential diseases.

Tabbies Come in All Different coat colors. Tabbies come in all colors. These coat colors can be black, grey, orange, chocolate, and many other shades. Some tabbies have dark stripes and others have muted stripes that blend in with the rest of their fur.

The four known distinct patterns, each having a sound genetic explanation, are the mackerel, classic, ticked and Spotted Tabby Cat, Orange tabby  patterns.

The classic tabby is also known as blotched or marbled tabby has the ‘M’ pattern on the forehead but the body markings, rather than primarily thin stripes or spots, are thick curving bands in a whirled or swirled pattern with a distinctive mark on each side of the body resembling a bullseye.

Classic tabbies each have a light-colored “butterfly” pattern on the shoulders and three thin stripes running along the spine.

Mackerel tabbies are also called ‘fishbone tabbies,’ probably doubly named after the mackerel fish. Mackerel Tabby cats have rings around their tails and legs and bands of solid or broken stripes around the rest of their body.

The orange tabby is a variant of any of the above tabby patterns, having phaeomelanin instead of eumelanin. The majority of orange tabby cats are male. About 20% of orange tabbies are estimated to be female.

The last tabby pattern, ticked, is in fact an absence of any pattern: all the hairs are agouti on the body of ticket tabby cats. Ticked tabby cat does not have the traditional stripes or spots on her body, and may not, at first, seem to be a tabby.

If you own a tabby cat, then as a pet owner, it is your responsibility to meet all their requirements and give them a healthy life.

Tabby cats are most suitable as pets as they prefer to live indoors. It is the favorite pet for many people mainly because the pet care task is quite simple.

They are typically meat-eaters and thrive on flesh of other animals. However, they don’t kill other animals for food. So, you need to feed them high-quality protein-rich cat food.

They need a lot of clean and fresh water throughout the day. Especially if you feed your tabby cat with dry cat food, the requirement of water is even more.

Tabby cats are very emotional creatures. So, you must always try to keep them in a happy and cheerful mood. If you do not interact with them much, then the cat’s personality will get affected.

Besides food and water, tabby cats need a lot of toys to play with. They prefer simple toys, such as balls, strings, sticks, fake mice etc. At times, they can even play with furniture around by climbing up and down, jumping around and do other activities that will amuse you.

Keep a close watch on the cat’s behavior and personality as they have this tendency to hide illnesses and injuries.

The process of grooming your cat should be fun for you and for them. You don’t need to push your cat to accept grooming, either. If your cat seems upset or stressed, take a break and try again later.

One of the best ways to maintain excessive shedding in cats is to brush their coat. Regular brushing helps remove the long hairs before they have a chance to fall off.

There are several brushes that work well with tabby cats and those with other coat patterns.

It’s recommended to bathe an indoor cat at least once per month. Some cats can go longer depending on the length of hair and their active lifestyle. Washing a cat every 4 to 6 weeks allows you to get rid of potential flea problems and keep their coat looking good.

The health of Tabbies cat can vary depending on its breed, but most cats can live upward of 15 years. The most common health conditions reported by ASPCA Pet Health Insurance pet parents with Tabby cats are hyperthyroidism, vomiting, urinary trouble, upset stomach, and weight loss. Most of the problems can be treated if diagnosed in a timely manner.

A cat’s diet, exercise and genetic factors play a major role in her overall health and life span. Coat color and markings, such as tabby stripes, don’t affect how long a cat will live. If your tabby cat is healthy and lives indoors, you can expect to enjoy her company between 12 and 18 years, maybe longer.

Here are a few pointers when it comes to tabby cats’ price: “Randomly” bred Thay can cost as little as $100 or less. Purebred tabbies can set you back with $700-$1500. Designer tabbies like the Bengal cost around $2k and more.

Some interesting facts about tabby cat