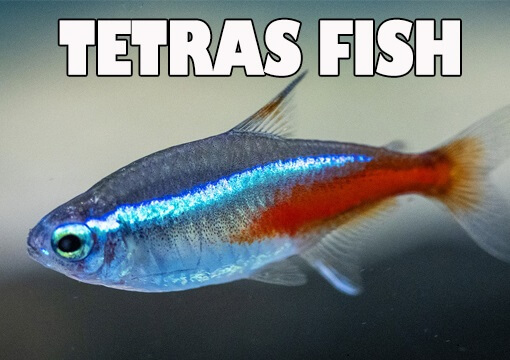 Tetras are members of the Characidae family and its former subfamilies Alestidae and Lebiasinidae. They are native to Africa, Central America, and South America.

Tetras are usually very peaceful, and people buy them for their calm and hardiness. They can be kept by both beginner and experienced aquarists with perfect results.

Tetra is no longer a phylogenetic or taxonomic word. It’s short for Tetragonopterus, a genus name for several of these fish that means “square-finned” in Greek.

The majority of tetras is calm and get along well with other social fish of similar size, however there are a few exceptions. Serpae tetras, for example, can be aggressive at times, especially if maintained in small numbers.

They’re calm, beautiful fish with a lot of color and personality packed into little bodies.

Tetras have fusiform bodies that are compressed and are recognized by their fins. They usually have a homocercal caudal fin and a large dorsal fin with a short link to the body of the fish.

Tetra fish are freshwater fish, so you’ll need to keep them in an aquarium with similar conditions. The temperature should be kept between 68 and 78 degrees Fahrenheit, and the PH should be between 5.5 and 7.5, giving in soft to medium water hardness.

They should only be kept in a community tank with other non-aggressive fish that aren’t big enough to eat them because they are such little fish. They are ideal tank mates since they are little, calm bottom dwellers.

Here are some things to keep in your mind when setting up a tetra fish tank.

Tetra fish get along well with a wide variety of other fish, but they’re especially good with calm fish in your tank. Rasboras, guppies, mollies, danios, betta fish, gouramis, and angelfish are just a few of the neon tetra species that get along well.

Tetras like to live in schools and can become disturbed if left alone, according to studies. Interestingly, despite their dislike of loneliness, tetra never forms a close pack in a tank unless a threat is present.

Tetras of the same species tend to school together and can only thrive if there are enough members in a school. It’s not a difficult task. It’s simple.

Tetras are easy to keep and may be kept with basically any other non-aggressive species. These fish have vibrant colours, energetic personalities, and are less sensitive to water conditions than other fish. They grow to a maximum size of 2″ and can live in captivity for up to 10 years if properly cared for.

Tetras are omnivorous, so Aqueon Tropical Flakes, Color Flakes, Tropical Granules, and Shrimp Pellets are ideal for them. Frozen and live foods can be used as treats or to aid in the spawning process. Rotate their meals on a regular basis for optimum results, and only give them once or twice a day what they can take in under 2 minutes.

If you love tetra fish and want to get different colored fish, then here we will give you information about some types of tetra fish. which you can add to your aquarium to enhance its beauty.

The Green Neon Tetra is a beautiful South American fish. It comes from streams all across the jungle, where the water is stained brown by fallen leaves and wood. These fish will live in high environments. They are, nevertheless, quite resilient and will tolerate a broad range of conditions.

The Blue Tetra, commonly known as Cochu’s Blue Tetra, is a shoaling fish found in the Amazon River Basin of South America’s rivers and streams. They should be kept in schools, just like other tetras, with a 20 to 30 gallon fish tank being the least size to start with.

Rainbow Tetra is a calm fish that may be found in slow-moving streams and small, quiet rivers. These tetras usually spend their time wandering about the tank’s mid-level and surface levels.

The lemon tetra is a tropical freshwater fish that originated in South America and belongs to the Characidae family. The species has been a popular aquarium fish since 1932, when it was first introduced to the aquarium.

The diamond tetra is a small characin family freshwater fish. It may be found in Venezuela, South America, near Lake Valencia. Males have significantly longer dorsal fins than females in this species, indicating strong sexual dimorphism.

Emperor tetras are found in Colombia’s Atrato and San Juan River basins, which are both freshwater. The fish’s body is a blue-gray colour with mauve tones and an almost iridescent shine. The body is lighter in colour below the black stripe that runs horizontally from head to tail.

The Congo tetra is a fish species belonging to the African tetra family that may be found in Africa’s middle Congo River Basin. It’s maintained in aquaria a lot. The Congo tetra prefers to gather in regions with dense vegetation, few trees, and sand, silt, and mud substrates.

The bloodfin tetra is a characin species native to South America’s Paraná River basin. In most cases, bloodfin tetras are kept in groups of five or more. They’ve been kept at temperatures ranging from 64 to 83 degrees Fahrenheit. Tetras are suited to soft, somewhat acidic water, and breeding requires soft water.

The species is known by a number of names among aquarium hobbyists, including blackline penguinfish, blackline thayeria, hockey-stick tetra, Thayeria boehlkei, and penguin fish. Worms, small insects, flake food, and crustaceans are among the species’ favourite foods.

The Serpae tetra, also known as the Red Minor tetra, Jewel tetra, or Callistus tetra, is a tetra species that belongs to the Characiformes family of tropical freshwater fish. Serpae tetras prefer water temperatures of 72–79 degrees Fahrenheit. In soft, neutral to slightly acidic water, they will do better and show off their finest colours.

Q. How long do tetras live for?

A. The Tetras are said to live for 10 years on average. Because they are sensitive to direct light rays, Paracheirodon innesi prefers blackwater environments. In an aquarium, you should keep 6-12 Tetras together. They are most active in a group of 12 or more.

Q. What is the maximum number of tetras that should be kept together?

A. In one tank, at least six neon tetras should be maintained together. Because neon tetras are a schooling species, you should keep at least six to ten of them in one tank. If you keep too few neon tetras together, they will become uneasy, agitated, and even die.

Q. What kind of fish can get along with tetras?

A. Others, such as Buenos Aires tetras, can grow to be extremely huge and energetic, which might be intimidating to smaller, more timid fish. Other tetra species, rasboras, tiny danios, tranquil barbs, properly sized rainbowfish, and livebearers are all good tank mates for tetras.