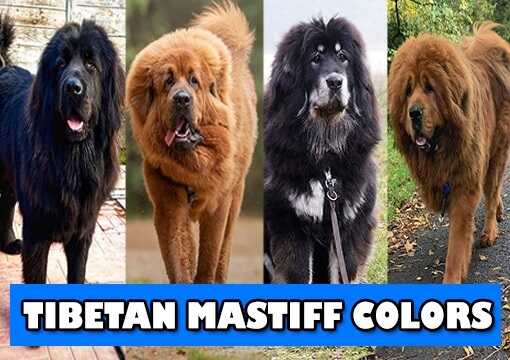 Tibetan mastiffs are big Tibetan dog breeds. The Tibetan Mastiff, with his majestic appearance, long coat, appealing color, and lovely tail, is likely to be a conversation starter and traffic stopper as you walk him down the street.

The Tibetan Mastiff, also known as the Do-Khyi, comes in a larger variety of colors than the true Mastiff breeds, and as a result, kennel associations are more relaxed about what colours are accepted in their breed standards.

During the peak of the breed’s popularity, this color was extremely popular, and a red-gold Tibetan Mastiff named Big Splash sold for $1.5 million in 2011.

Most kennel associations recognized the golden colour as a valid Tibetan Mastiff color, which can range “from a pure golden to a rich red gold.”

This is one dog type that is truly worth its weight in gold, or so it appears!

Black Tibetan Mastiff is very rare dog breed in the Mastiff family that it has never been determined whether the allele is recessive or a mutation that is dominant,” this is the predominant color among Tibetan Mastiffs.

As previously mentioned, these aren’t actual Mastiffs, which may clarify why they have a various color coat.

The only Mastiffs with black coats are those that, despite working as livestock guardians, aren’t Mastiffs in the traditional sense. Aside from the black Tibetan Mastiff, there are also black Spanish and Neapolitan Mastiffs, none of which are real Mastiffs.

Brown Tibetan Mastiffs come in a variety of colours, from dark mahogany to light biscuit. With their thick ruffs of hair covering the neck and shoulders, some have a striking resemblance to lions.

The brown Tibetan Mastiff has a shoulder height of 24 to 29 inches and weighs between 70 and 150 pounds. This breed has been banned in several cities and nations around the world due to its large size.

Blue Tibetan Mastiffs have a dilute gene from one of their parents, which dilutes the black color and results in a variety of colours range from silver to charcoal grey.

It’s not uncommon for blue Tibetan Mastiffs to have blue or grey eyes and noses as a result of this gene.

Despite the fact that blue is more often associated with the Neapolitan Mastiff, some breeders specialized on blue Tibetan Mastiffs.

Black and Tan Tibetan Mastiffs aren’t particularly common as it is produced by the most recessive gene in their DNA. As with the gold Mastiffs, the tan colorings can vary dramatically, appearing either very light or taking on a rich, golden hue similar to that of a lion.

Black and white or piebald Tibetan Mastiffs are also not recognized by the kennel clubs but “are widely spread in Hinjang” and inner Mongolia.

You may also find Tibetan Mastiffs with liver, lilac, or brindle coats and even some that are particolored, but these are neither particularly common nor especially sought-after.