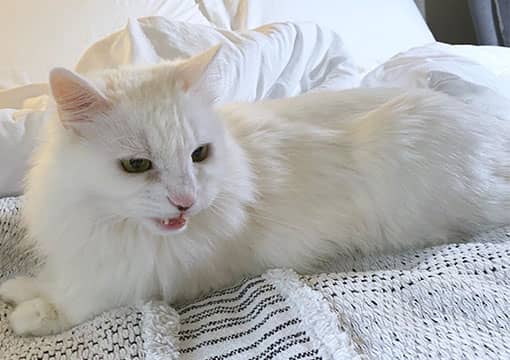 Turkish Angora cats are prized in their native Turkey for their long, delicate, ballerina-like bodies and smooth, silky fur. Turkish Angoras, despite their fragile look, are energetic cats that may love with their owners and friendly with children or other pets.

A Turkish Angora may live in almost any style of home, but it thrives best in one with lots of love and care. In comparison to other cats, the Turkish Angora is fairly needy and dislikes being left alone. Turkish Angoras have a greater activity level and can get into mischief if bored.

The Turkish Angora is a naturally occurring breed that first originated in Turkey about the 15th century. Nobody knows for sure, but they are said to have descended from the African wildcat, and their long, silky hair is the product of a spontaneous mutation.

Turkish Angora cats were first mentioned in writing in 16th century France, so it’s widely assumed that they arrived in Britain and France in the late 15th century. Turkish Angoras were imported to the Americas by the 1700s.

In the late 1800s, Turkish Angoras were shown at some of the first cat shows, and Persian breeds began to include them in their breeding plans.

Turkish Angoras have graceful, sinuous bodies and long, silky coats. A young Turkish Angora might be mistaken as a snow weasel. Turkish Angoras can have a range of colors, despite being noted for their shiny white coat and elegant tail.

The Angora coat is long, silky, and available in a broad range of colors and variants. White is typically the most popular and the only color bred in the Ankara Zoo but Turkish Angoras are also available in black, reds, browns, grays, tabby, tortoiseshell, and bicolor varieties.

Blue, green, amber, yellow, and heterochromatic eyes are all possible. Ears are pointy, big, and spread apart. The eyes are almond-shaped, and the profile is divided into two straight planes. The plumed tail is widely held perpendicular to the back, upright.

The Turkish Angora’s beauty and affection complement its owner’s affectionate nature, readily involving themselves in all they do. They’ll sit for lengthy amounts of time just to enjoy the company, which is only enhanced by their excellent attitude.

The Turkish Angora is a lovely animal, yet she might become agitated if her environment changes quickly. Despite her semi-feral origin, this cat is peaceful.

The Angora is a loving and friendly dog who enjoys playing and running. Angora cats are an outgoing, social cat breed that is also playful and friendly, making them wonderful family pets.

The Turkish Angora is a very clever animal. They are highly social cats who form close ties with their family members.

Deafness is a genetic feature in Turkish Angoras. This does not appear to have an impact on their quality of life, as deaf Angoras enjoy typical, healthy lives.

Turkish Angoras enjoy spirited play, whether with humans or on their own. A variety of toys will keep them busy, and their freedom means they will do fine if left alone for a few hours.

The Turkish Angora has a long and slender physique with a single complete coat to add to their charm. This cat reaches 9-14 inches tall with the britches on its hind legs. Unfortunately, there is no world record for the biggest Turkish Angora cat.

Female Turkish Angora cats weigh between 8 and 12 pounds. Males are slightly bigger than females on average, weighing more than 12 lbs. If the cat is neutered or spayed, its future growth should be unaffected, although its metabolism may vary.

While the normal cat lives about 16 years, these cats typically live between 9 and 14 years. Even though they will require some coat care, veterinary care is required for early intervention against rare feline diseases.

Kittens with genetic ataxia are unlikely to live to adulthood; however hypertrophic cardiomyopathy can develop between the ages of 2 and 6. Males are more sensitive, although they may die earlier from heart failure.

The Turkish Angora cat is generally healthy, but like all breeds, it is prone to some health problems. It’s important to note that several white cats with one or two blue eyes are prone to deafness in one or both ears.

The gene that causes deaf white cats is found in the majority of Turkish Angoras. Hereditary ataxia, a rare health condition thought to be inherited as an inherited disorder, affects certain Angora kittens. Kittens with ataxia exhibit shaky movements and do not live to adulthood.

Another rare but well-known hereditary illness is hypertrophic cardiomyopathy, a heart disease that affects cats between the ages of two and six, with males being affected more often and severely than females.

The Turkish Angora’s long, silky coats have no undercoat, making grooming a breeze. They require brushing once or twice a week to keep their coats shiny and in good condition.

Their hair is thin enough that it does not clump or mat readily, but it will continue to grow until they are around 2 years old, so brushing sessions will get more complex as your kitten grows.

Keep a watch on their ears and around their eyes, as longer fur can trap dirt around those areas, possibly leading to infection. You’ll need to clip Angora’s nails on a daily basis, feed him a balanced diet, and keep his litter box clean.

Turkish Angoras thrive on the nutrients of a high-quality adult cat chow. Consider a healthy weight formula for Angoras who need help with weight control.

Turkish Angora kittens should be fed kitten food for the first year of their lives to help with growth and development.

Overfeeding may lead to obesity, which can cause a slew of other health issues, so it’s critical to feed your Turkish Angora a healthy, balanced diet.

Cat’s diet is heavily influenced by its age, gender, and degree of activity. If you’re unsure how much to give cat, consult the feeding advice included with favorite cat food or visit the vet.

When it comes to adopting the Turkish Angora, the price might vary greatly. Adopting from a shelter is typically less expensive, with fees often ranging from $75 to $150.

However, finding a breeder that specialize in purebred kittens might raise the price from $600 to $2,000. Kittens with excellent lineage that would be considered for competition might cost up to $3,000.