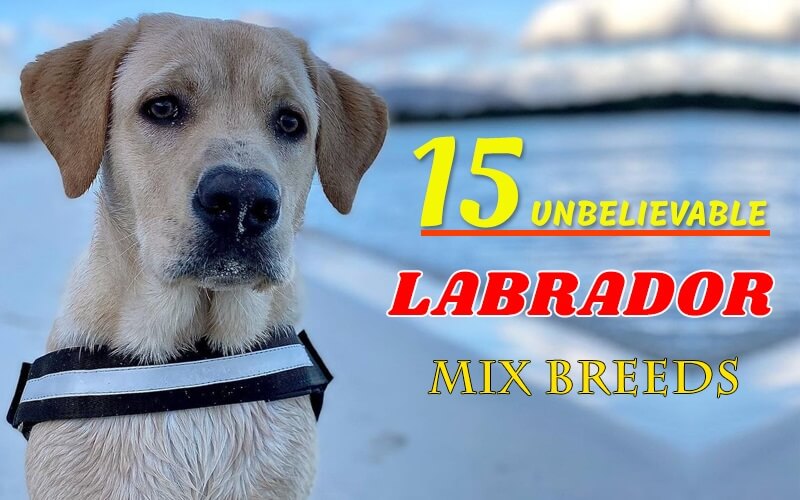 Labrador is also known as labrador retriever. These lovable and sweet-face dog is most popular in America’s. This breed is retriever-gun dog from the United Kingdom that was developed from imported Canadian fishing dog and they are one of the medium to large size breed.

Many Labrador mixe breeds are fair incredible dog in their own right. So, here we list out complete list of the top 15 Unbelievable Labrador mixed breed that we think are just the cutest canines around.

Aussiedor need at least one long walk, run or active playtime each day, and they requires both exercise and mental stimulation.

Labrakita make excellent guard dogs because they are defensive and do not trust strangers but they will need to be trained well so they do not attack guests or other animals.

Borador is also call the labrador collie mix it’s high energetic, playful medium to large size dog breed. The Borador is a mixed between a purebred Border collie and a Labrador retriever.

They are able to easily learn how to become a narcotics dog, it is safe to say that they can be taught to sit, stay and perform many different tricks with minimal training sessions.

Doberdor is a hybrid dog breed resulting between labrador and Doberman. Lab Doberman Mix are active and energetic dogs. They need plenty of exercises to be able to prevent boredom and aggression due to pent-up energy.

The Beagador is designer dog breed cross between Labrador and Beagle. Beagle Lab Mix is medium-sized body has a short coat akin to that of its Labrador parent. The Labeagles will require an expert hand to help them learn all the basic etiquette of living in a family.

Beagadors are very high energy dogs.They hate being isolated or left alone, and can often have separation anxiety from their families.

The German Sheprador is considered a large sized breed and when fully grown, he will weight 60-85 pounds depending on whether you have a male or a female. German Sheprador can be prone to hip dysplasia, he will require regular, consistent exercise to keep him at his ideal weight.

The Mastador is an affectionate and gentle dog. They very happy and very smart too.This is a great dog with children, especially with early socialization and when the children have been taught how to play nicely with her.

The corgidor is mix breed dog cross between Corgi and labrador. These fun dogs will love you to the end and be loyal and protective, too. Corgi lab mixes are considered moderately easy to train.

They will learn in an average amount of time, so you should expect that results will occur gradually. Corgidors make great family pets because they are loving and happy companions.

The Dachsador is a mixed breed dog cross between labrador and Dachshund. They are loving, active, and family friendly dog breed. Dachsadors are also sometimes known as Doxadors, Doxidors, and Weinerdors.

Dachsador is a pleasure to be around and is content with very little. They enjoy social interaction and are cuddly and affectionate.

Labradoodle is a cross of Standard, Miniature, or Toy poodle and the Labrador Retriever also known as Labrador Poodle Mix. Labradoodles have a moderate activity level. They are intelligent, friendly, and affectionate.

Labrador Poodle Mix is likely to be smart and highly trainable, thanks to the Poodle’s intelligence and the Lab’s love of working with people

Labrabull is a very energetic dog. Labrabull’s are loving, sweet, caring, loyal beyond belief, playful, and gentle, the Lab-Pits are some of the gentlest dogs.

Bulldog Lab Mix is also known as Bullador comes from two sweet natured and lively parents enlglish bulldog and Labrador. They are medium to large size dog, love to the family, children and other dogs.

The Bullador is a high energy dog and needs a lot of exercise to keep her happy. He is also enjoys activities like swimming, long walks, and playing games like fetch, tug of war and so on.

Rottweiler Lab Mix is also known as Rottador cross between Rottweiler and Labrador. This large size dog breed is best suited to an experienced owner, as they need a lot of training and socializing.

The size of one of these dogs is anywhere between 24-27 inches in height, with a weight of around 70-115 pounds.

The Labradane is Loyal, affectionate, and playful dog breed which cross between Labrador Retriever and Great Dane dog breeds. These active, friendly, sweet dogs are fairly rare, but they are growing in popularity across the United States.

The Labradane is considered a very large sized breed and when fully grown, he will weight 100-180 pounds depending on whether you have a male or a female.

The Labsky is also call the labrador husky or Husky lab mix which resulting between labrador and siberian husky. They are a truly gorgeous breed that tend to have beautiful markings and a distinctive look.

Labskys are typically lively, athletic and full of fun. They are loving and affectionate, sometimes fawningly so.