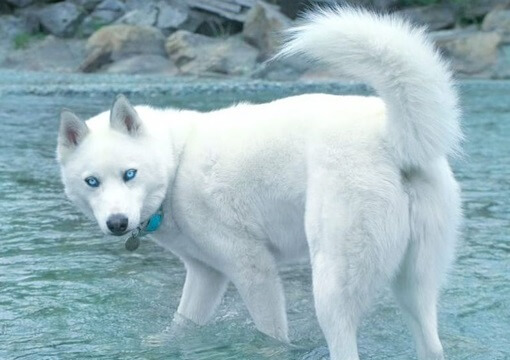 White husky is also known as Isabella Husky comes in white color. This breed is one kind of Siberian husky. White Huskie’s best qualities are strength, beauty and stamina, which makes them stand out to the Siberian Husky dog breed.

White Husky is really one of the most stunning dog breeds forever. If you are a true dog lover and moreover a lover of Husky-like dogs, here we share some interesting facts about White husky.

Read this article carefully and give your opinion by commenting.

These dogs have evolved to have a thick, double layer, insulating coat. Their thick white coat is a result of a recessive gene.  You will always need to brush and groom your white husky to remove shed hairs that get trapped in the undercoat.

Siberian Huskies are originated in Northeast Asia where they are bred by the Chukchi people of Siberia for sled-pulling, and companionship. During the early 20th century, Alaskans grew interested in the breed and the Siberian husky was brought to the United States.

Husky was officially recognized by the American Kennel Club (AKC) in 1930. They are the 12th most popular breed in the U.S., according to the AKC.

White huskies are comes in two sizes, The medium-size dog that usually weights between 35 and 60 pounds, and typically stand 20 to 23.5 inches tall. These dogs are lean, muscular and strong. Miniature Husky will weight 18 to 25 pounds, and stand 12 to 16 inches tall.

White Huskies are don’t usually bark because they tend to use different ways of communicating with you such as howling, whining, or speaking. While some huskies do bark often, it’s rare. They will more likely howl than bark. Huskies sometimes bark as an invitation to play. Other than that, Huskies rarely bark.

White Husky is athletic and larger dog breed. This means they are strong and powerful, so it is best to begin training early on while your white Husky is still a puppy. They can be hard headed at times and become bored easily, which can make training frustrating for the novice dog owner.

White Siberian Huskies are a medium-size breed that typically lives 10-13 years, the Siberian Husky itself has a longer lifespan, typically living between 12-15 years. And it’s not uncommon to hear of them living to the ripe old age 16. Many huskies live up to 15 years, and a few live even longer. Female dogs tend to live slightly longer than male dogs in all breeds, including huskies.

They Shed A Lot

Yes White uskies shed. Unlike other dog breeds that shed year-round, huskies shed once or twice a year due to seasonal changes. This is called “blowing” their undercoat and can take three to five weeks. Most Huskies will blow there undercoat twice a year.

It is recommended to brush your Siberian constantly during the “blowing of their coat” and after at least once a week to control there shedding around your home. 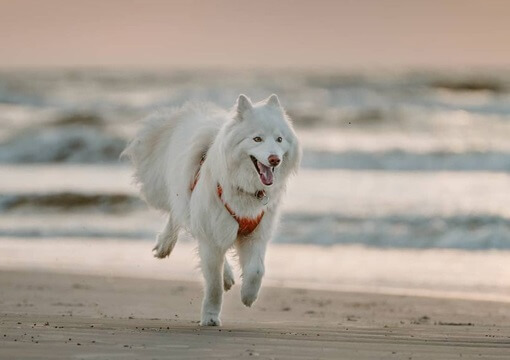 They Are Extremely Active

Huskies need to be exercised 30 to 60 minutes daily to keep them from becoming bored. They make excellent jogging companions, but should not be exercised in hot weather.

White Huskies are a breed that was bred to drag sleighs for hours daily in freezing temperatures. This means that they need a lot of exercise to be properly stimulated and if they don’t get the exercise then it can cause them to become hyper.

They Can Be Difficult To Train

White Huskies are well known for being difficult to train. Huskies are independent and intelligent, which can come across as stubborn. So while your Husky will learn fast during training, you need to be extra careful with your approach to train them properly.

They Are Not Good Guarding Dogs

Siberian Huskies do not make good guard dogs. They are not a guardian breed as they lack natural aggression and they are notoriously difficult to train. They love people and are more concerned with who will play with them not who shouldn’t be there.

Huskies can be watch dogs, informing you of the presence of someone on your property. They can also be trained to be guard dogs although they do lack natural aggression that other guardian breeds have.